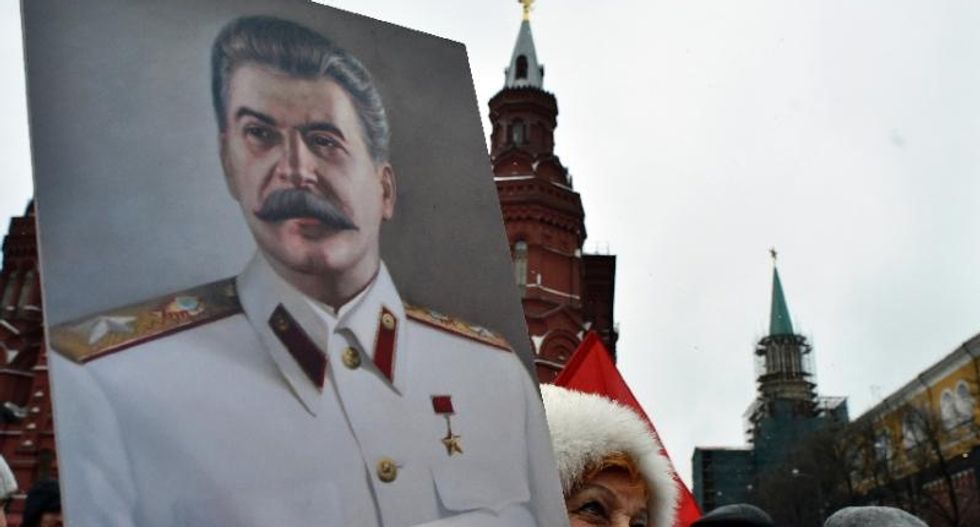 A Russian Communist Party supporter holds a portrait of late Soviet leader Joseph Stalin during a memorial ceremony to mark the 63rd anniversary of his death at Moscow's Red Square on March 5, 2016 (AFP Photo/Yuri Kadobnov)

A Russian passenger plane carrying 71 people crashed outside Moscow on Sunday after taking off from the capital's Domodedovo airport, Russian media reported.

The Antonov An-148 plane operated by the domestic Saratov Airlines was flying to Orsk, a city in the Urals, and crashed in the Ramensky district on the outskirts of Moscow. Russian news agencies reported 65 passengers and 6 crew were on board.

News agencies said witnesses in the village of Argunovo saw a burning plane falling from the sky.

A source from Russia's emergency services told Interfax that the 71 people on board "had no chance" of survival.

The same news agency reported that the wreckage of the plane was spread over a wide area around the crash site.

Russian state television aired a video of the crash site, showing parts of the wreckage in the snow. Russia has seen record high snowfalls in recent days and visibility was reportedly poor.

The Russian-made plane was 7 years-old and bought by Saratov Airlines from another Russian airline a year ago.

A source at Domodedovo, Moscow's second largest airport, told agencies that the plane disappeared from radars within two minutes of take off.

The governor of the Orenburg region, where the plane was flying to, told Russian media that "more than 60 people" onboard the plane were from the region.

Prosecutors opened an investigation into Saratov Airlines following the crash.

A light aircraft crashed in November in Russia's far east, killing six people on board.

In December 2016 a military plane carrying Russia's famed Red Army Choir crashed after taking off from the Black Sea resort of Sochi, killing all 92 people on board.

The choir had been due to give a concert to Russian troops operating in Syria.

Pilot error was blamed for that crash.

In March 2016, all 62 passengers died when a FlyDubia jet crashed in bad weather during an aborted landing at Rostov-on-Don airport.