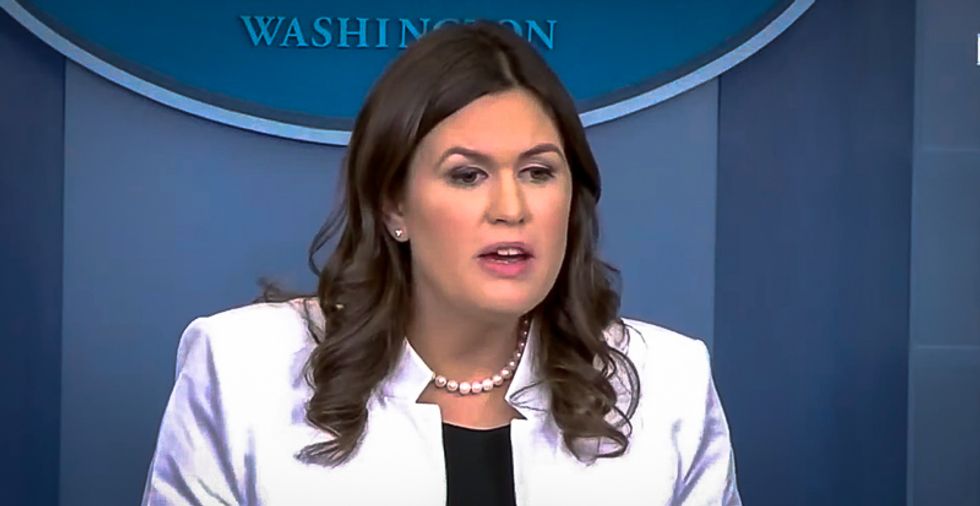 White House Press Secretary Sarah Sanders on Tuesday insisted that President Donald Trump was not "advocating" for a shutdown even though he had said that he would "love" one just moments earlier.

During a roundtable discussion about immigration earlier in the day, Trump had suggested that he would support a government shutdown if Democrats did not help him pass tougher immigration laws.

"We'll do a shutdown," Trump proposed. "And it's worth it for our country. I'd love to see a shutdown if we don't get this stuff taken care of."

At Tuesday's White House briefing, reporters reminded Sanders that Trump had called the idea of a shutdown "devastating" just weeks before.

"The only people that have caused a shutdown are the Democrats who have repeatedly held the government hostage over their own politics," Sanders charged. "Democrats actually shut the government down. Let's not forget that."

"If the Democrat [SIC] Party is going to continue to threaten a shutdown because they won't include responsible immigration reform, including fixing MS-13 loopholes and other issues then the president welcomes that fight," she added, reading from a statement. "It's a fight we won last time and it's one that we're very confident that we'll win again."

Pressed on the president's remarks, Sanders appeared to become frustrated.

"Look, we are not advocating for the shutdown," she said. "That's the fault of the Democrats."