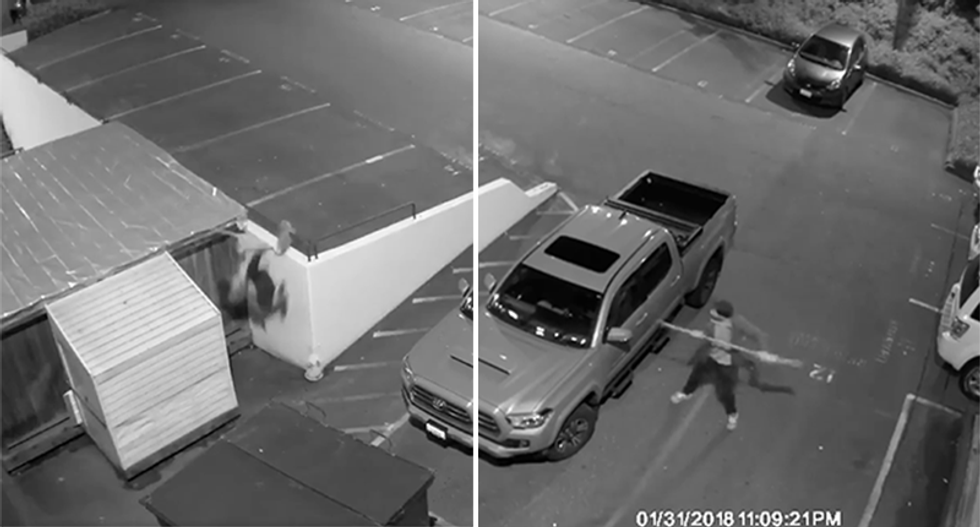 Wednesday night, a truck in the KIRO Radio station lot was accosted by a would-be prowler. It didn't go well.

In a video posted on the station's video page, the attempted burglar is shown trying to break the windows of the station itself. When that didn't work, he took to the truck.

"It's an open parking lot, 11:09 p..m.," begins KIRO Radio's John Curley. "There's a gentleman, who's got himself a mop and a mop handle and he's pointing it toward a window of a pick-up truck. He's got his stance, shoulder-length apart. And he bangs the mop at the top of the window! He hits and resets. He's got his feet now, moving apart, looking to the right, check to make sure no one is coming. And he now, positions the mop again."

This went on for several moments as the man repeatedly tried to break the truck's window with the end of the mop. He even goes so far as to take a running start with the mop toward the truck window.

"Now remember, the dirty part of the mop is under his arm," Curley said at one point.

Ultimately, the man gave up on the truck and turned toward trying to break into the station.

"He's starting to move away form the car and he gets a second plan," Curley said. "This time he starts to climb up onto the rooftop. He still has the mop in his left hand and now he starts to think about whether or not he wants to climb up. He puts the right foot on top of the wall. Here he comes! And he falls off! Oh my gosh! Somebody get the salami and cream-cheese and rub it all over his face! He's unconscious! On the ground! With the mop! That's the story!"

Watch the hilarious play-by-play below: