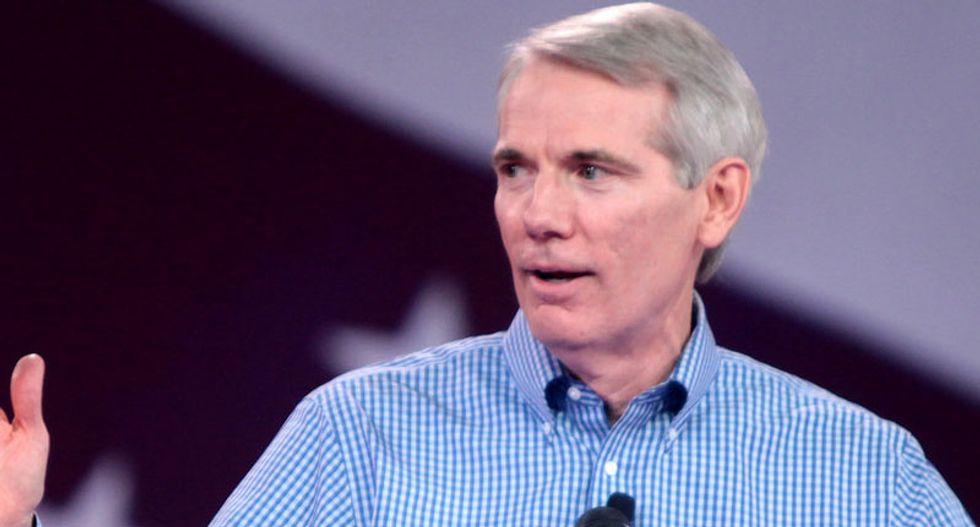 As Republican U.S. Senator Rob Portman spoke to small-business owners over the weekend in his home state of Ohio, he hammered on a major election-year theme for Republicans - that tax cuts are helping the little guy.

What did not come up in his talk in Zanesville was the more complicated topic of Republican President Donald Trump, whose victory in Ohio in 2016 helped propel him to the White House.

The enactment last year of a huge tax-cut package could offer Republicans in battleground states the chance to campaign in November's congressional elections without the burden of Trump's relatively high unfavorability ratings.

The president claimed credit for the tax overhaul he signed into law in December, the biggest in 30 years. But the plan was developed and approved by Republican lawmakers with minimal White House involvement. It was the Republican-controlled Congress' only major accomplishment of 2017.

So some Republicans may feel free to leave Trump out of their tax-cut message. Portman, a centrist who is not up for re-election in November, did just that on Friday and Saturday.

"We have seen over 350 companies make positive announcements ... they all have a positive story to tell about how they are taking the tax savings and plowing it back into their business," Portman said at GKM Auto Parts on Friday.

Portman said a month before the 2016 election that he could not support Trump and said afterward he did not vote for him.

Before a small group of business people, GKM owner Kelly Moore praised Portman for helping craft the tax bill that she said let her reinstate healthcare coverage for her employees.

On his "Results for the Middle Class Tax Reform Tour," Portman has hosted several other tax-focused events, including ones on Saturday in Cleveland and Mentor. Reports on his official website from the two events made no mention of Trump.

Portman is seeking to promote the tax cuts as a benefit for working Americans, but that view is strongly challenged by Democrats, who say the tax changes mainly benefit corporations and the rich.

The issue may not be a sure-fire winner with voters. A Feb. 13-22 Reuters/Ipsos poll found a range of views about the tax legislation, with only 3 percent of respondents saying they had received an actual benefit, like a raise or bonus.

Ohio's other U.S. senator, Democrat Sherrod Brown, is seeking re-election this November, with the state likely to be a major electoral battleground as the two parties fight for control of Congress. Portman and Trump are both backing Representative Jim Renacci in the Republican primary race to choose a challenger to Brown.

But some Republican strategists said talks like the one Portman gave in Zanesville were helping the party shrink the Democrats' advantage in a generic poll as to which party is favored by voters in congressional elections.

The tax cuts are much friendlier territory for Republicans than Trump’s tweets, said John Feehery, a lobbyist and former senior Republican aide in the House of Representatives.

“If we are talking about President Trump and his character, it's probably not a winner for Republicans," Feehery said.

(Additional reporting by Susan Cornwell in Washington and Chris Kahn in New York; Editing by Kevin Drawbaugh and Peter Cooney)