Trump's ambassador to Israel flips out on Haaretz newspaper 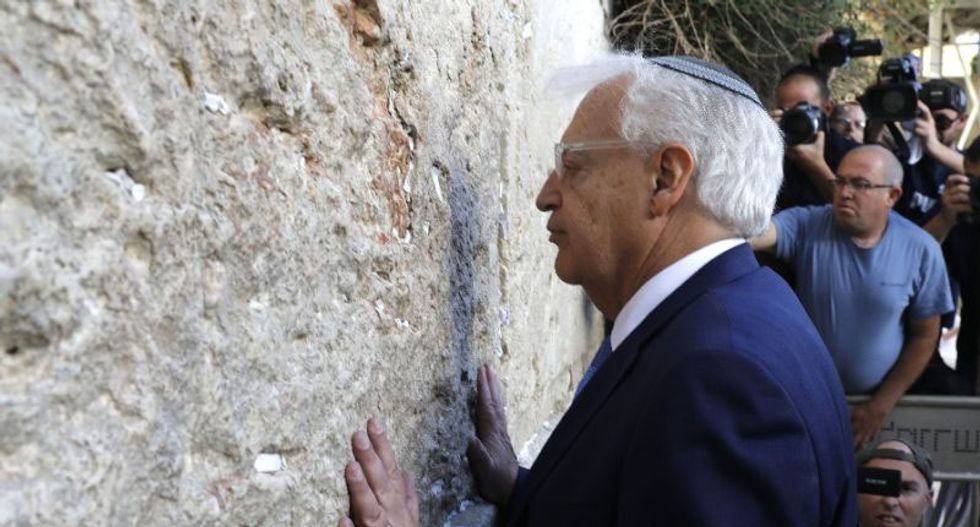 US ambassador David Friedman visits the Western Wall in the old city of Jerusalem on May 15, 2017 (AFP Photo/Menahem KAHANA)

The American ambassador to Israel attacked an Israeli leftwing newspaper Friday, questioning whether it had any "dignity" after a vitriolic column.

The quarrel erupted after Haaretz newspaper criticised US Ambassador David Friedman, personally selected by President Donald Trump, for his support of settlements in the occupied Palestinian territories.

In the wake of the murder of an Israeli rabbi and father of four from the Har Bracha settlement on Monday, Friedman tweeted that he had provided an ambulance for the community 20 years ago.

Friedman then criticised Palestinian "leaders" for praising the killing, although Palestinian president Mahmud Abbas said nothing about it.

In response Haaretz, which opposes settlement building in the Palestinian territories, ran a column by commentator Gideon Levy saying that "with Friedman's ambulance or without it, Har Bracha (literally, 'Mountain of Blessing') is a mountain of curses."

It accused Friedman, who was Trump's personal lawyer before being confirmed as ambassador in May 2017, of "encouraging and funding war crimes and violations of international law".

"What has become of .@Haaretz ? Four young children are sitting shiva (mourning) for their murdered father and this publication calls their community a 'mountain of curses.' Have they no decency?" Friedman tweeted on Friday.

In a reply on Twitter, Haaretz publisher Amos Schocken said on Twitter that "Gideon Levy is right" and that the US administration's support for Israel and its settlement policies was causing bloodshed.

"As long as the policy of Israel that your Government and yourself support is obstructing (the) peace process, practical annexation of the territories, perpetuating apartheid, fighting terror but willing to pay its price, there will be more Shivas," Schocken wrote.

More than 600,000 Israelis live in settlements in the West Bank and east Jerusalem that are considered illegal under international law.

Relations between Washington and the Palestinians have been severely strained since Trump's December decision to recognise Jerusalem as Israel's capital and move the US embassy there.

In remarks published Friday, Trump called the Jerusalem move "a very big point" in his first year as president.

Speaking to the Israel Hayom daily, Trump said that both Israel and the Palestinians "will have to make hard compromises to reach a peace agreement."