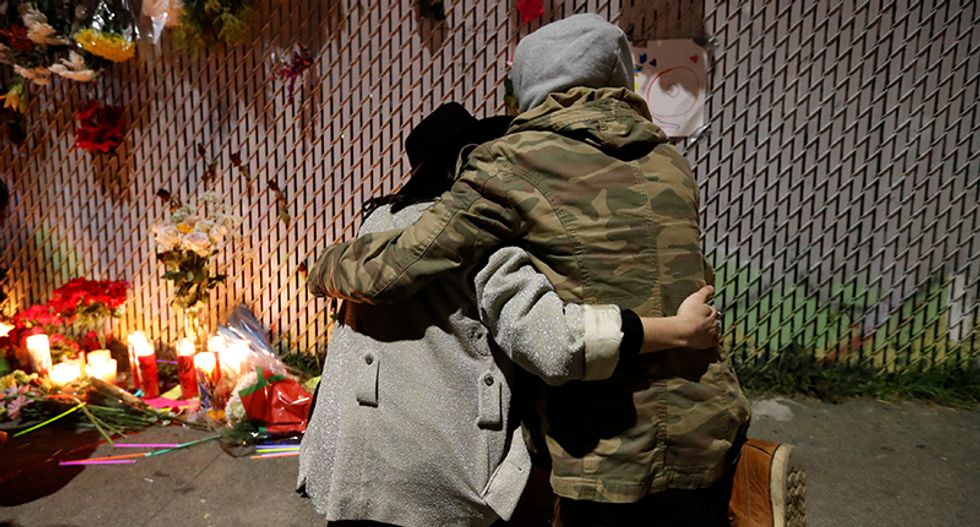 Rachel Saxer (L) embraces friend La Tron at a makeshift memorial near the scene of a fatal warehouse fire in the Fruitvale district of Oakland, California, U.S. December 4, 2016. REUTERS/Stephen Lam

Two men pleaded not guilty on Tuesday to charges of involuntary manslaughter in a deadly 2016 Oakland, California, warehouse fire where 36 people died at an illegal dance party, the San Francisco Chronicle reported.

The men, Derrick Almena and Max Harris, former residents of the Oakland Ghost Ship warehouse, will face a jury trial in July on 36 felony counts, the newspaper said. Almena's first name has also been listed in official documents as "Derick."

They were arrested in June 2017 and prosecutors have said they face up to 39 years in prison if convicted.

Court officials and lawyers for the two defendants were not immediately available for comment.

The December 2016 blaze was the deadliest fire in the United States since 100 people perished in a 2003 Rhode Island nightclub fire.

Almena rented the warehouse, which was known as the Ghost Ship, and ran it as an art collective and communal residence, while Harris was a creative director of the art space, prosecutors said in a document presented to an Alameda County Court in December 2017.

Prosecutors said the building did not meet fire code regulations and was of unsafe construction, the document said.

(Reporting by Suzannah Gonzales in Chicago and Jon Herskovitz in Austin, Texas; Editing by Lisa Shumaker and David Gregorio)