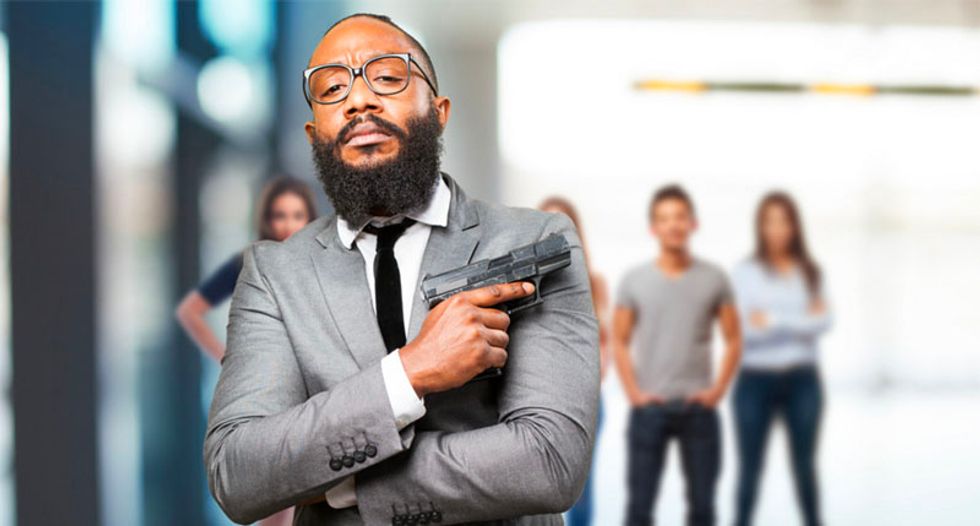 The only greater certainty than another mass shooting in this country is the likelihood that it will be met with inaction. Since the 2012 massacre of 20 first-graders and six adults at Sandy Hook Elementary School, there have been a staggering 1,607 mass shootings across the U.S., nearly 240 in schools. Each has been met with useless thoughts and prayers from craven conservative politicians, all of whom insist there’s never a right time to discuss gun control. The fatigue incurred from the whole circular spectacle makes it feel like it might just be easier to start labeling lawmakers either “pro-child murder” or “anti-child murder.”

It’s impossible to reason with the disingenuous logic that mass slaughter is just the cost of freedom, and not a consequence of NRA-owned politicians, which is why even the mildest gun reform seems impossible. Sandy Hook proved the GOP is willing to take donor dollars to look away from dead American children. The correlation between levels of gun ownership and gun deaths has similarly failed to rouse GOP political will, as have arguments that military-style killing machines should be kept off U.S. streets. While the “mental health problems” of white “lone wolf” shooters bring Republicans to crocodile tears, Trump signed a bill making it easier for mentally ill people to buy guns just a year ago. The knowledge that toddlers accidentally shoot more Americans annually than foreign terrorists do didn't stop Iowa Republicans from proposing a bill to let “1-year-olds, 2-year-olds, 3-year-olds [and] 4-year-olds...operate handguns,” leading one Democratic lawmaker to observe, “We do not need a militia of toddlers.” Perhaps relatedly, studies find the reflexive GOP tendency following mass killings is to make gun laws more, not less permissive, as evidenced by Florida Republicans’ attempts to loosen state gun restrictions just 24 hours after the Parkland massacre.

Ending mass shootings might seem like a hopeless cause in light of all this, but that kind of thinking ignores the historic infallibility of racism to move American political mountains. The shift in the public face of poverty from white to black helped take us from the New Deal to the destruction of the welfare state; conversely, as drug addiction has gone from being an "inner city" (read: black) to a "suburban" (read: white) problem, the state has transformed from carceral to compassionate. A movement—both visible and vocal—to arm black Americans en masse would fire up GOP political will toward gun control, and probably at speeds currently unimaginable. Second Amendment hardliners often engage in bad-faith references to America’s racist gun control history at convenient moments, namely when trying convince wary black folks, who statistically are overwhelmingly pro-gun control, to join the chorus calling for unfettered gun access. There are too many reasons to question their sudden commitment to anti-racism in those moments. That said, there is historic precedence for the mere idea of black gun possession leading directly to white American efforts at gun control.

These policies even predate this country’s official nationhood. The Splinter’s Daniel Rivero points to the “first gun control law,” passed in Virginia in 1640, which “explicitly banned black people from owning guns, even if they were not slaves.” The 1857 Dred Scott decision prohibited blacks from becoming American citizens, in part because citizenship would confer the right “to keep and carry arms...inevitably producing discontent and insubordination...and endangering the peace and safety of the State.” Post-Civil War “Black Codes” were adopted throughout much the South, making gun ownership by freed blacks illegal. The Atlantic notes that to “enforce the gun ban, white men riding in posses began terrorizing black communities....The most infamous of these disarmament posses, of course, was the Ku Klux Klan.”

Martin Luther King, who received endless death threats and was the target of a house bombing in 1956, applied for an open carry permit, but was denied by Montgomery, Alabama’s racist police force. When the Black Panther Party for Self Defense, in accordance with California law, began openly carrying weapons to patrol Oakland’s neighborhoods, the state legislature quickly crafted, and Gov. Ronald Reagan quickly signed, the 1967 Mulford Act ending public carry. On the heels of race riots, Congress Omnibus Crime Control and Safe Streets Act of 1968, followed by the Gun Control Act of 1968, which Georgetown historian Adam Winkler notes included a provision to restrict “‘Saturday Night Specials’—the cheap, easily available guns often used by [black] youth.” The legislation was the first federal gun law in nearly three decades, and proved lawmakers would rather institute widespread gun control measures than potentially have a widely armed black populace.

More recently, the understanding that the Second Amendment serves only to protect America’s white citizens was reified with the 2014 police murder of John Crawford III, who was holding an airgun in a Walmart located in Ohio, an open carry state. The same is true of Philando Castile, a licensed gun owner who had just informed cops he was carrying when Minnesota police officer Jeronimo Yanez unloaded five fatal shots into his body. (The NRA was conspicuously mum on the issue.) The Christian Science Monitor cites research from Jennifer Carlson, author of “Citizen-Protectors: The Everyday Politics of Guns in an Age of Decline,” who noted discrepancies in the Michigan licensing practices that stood until 2015.

She found differences in how gun boards operated in Michigan's majority-black Wayne County and majority-white Oakland County. Black concealed-carry applicants in Wayne were routinely lectured and quizzed in public forums – what she calls “degradation ceremonies.” White gun owners in Oakland, meanwhile, were addressed without lectures in hearings where they could plead their case in a semi-private room. (Michigan has since done away with the gun boards.)

White folks' deep-seated fears of black folks will always ensure pushback on arms in black hands. These attitudes, it will surprise zero black people, are yet more pronounced among white gun advocates. That is, the intensity of gun fervor in white Americans often correlates directly with racist attitudes, and by extension, fears and stereotypes about black criminality, thus creating a perceived need for more guns. Researchers note that “for each 1 point increase in symbolic racism there was a 50 percent increase in the odds of having a gun at home.” Similarly, Jason McDaniel and Sean McElwee analyzed data comparing white racial resentment and gun attitudes and emerged with the near-obvious conclusion, “Opposition to gun control—like opposition to immigration, Sharia law, and ‘political correctness’—has become linked to things that racially resentful whites fear." It seems pretty likely that, were the media face of gun ownership to become black, calls to institute legislative controls would suddenly fill the halls of Congress.

By the most recent tally, just 19 percent of African-Americans have a gun in their household, compared with 41 percent of whites. But new fears about rising racist violence, an increase in the number of hate groups and the everyday transparent bigotry of the Trump administration are reportedly helping drive up the number of African-American gun buyers. Imagine that this leads to thousands, even millions, of black folks joining the NRA, applying for concealed carry licenses, starting gun clubs around the country and attempting to exercise our rights as citizens. Racism would, as it always has, perk up and put a stop to that, and fast. The official numbers aren’t yet in, but if the needle on black gun ownership noticeably moves, it will be taken as cause for alarm and time to politically act. And once again, black folks will have saved America from itself.