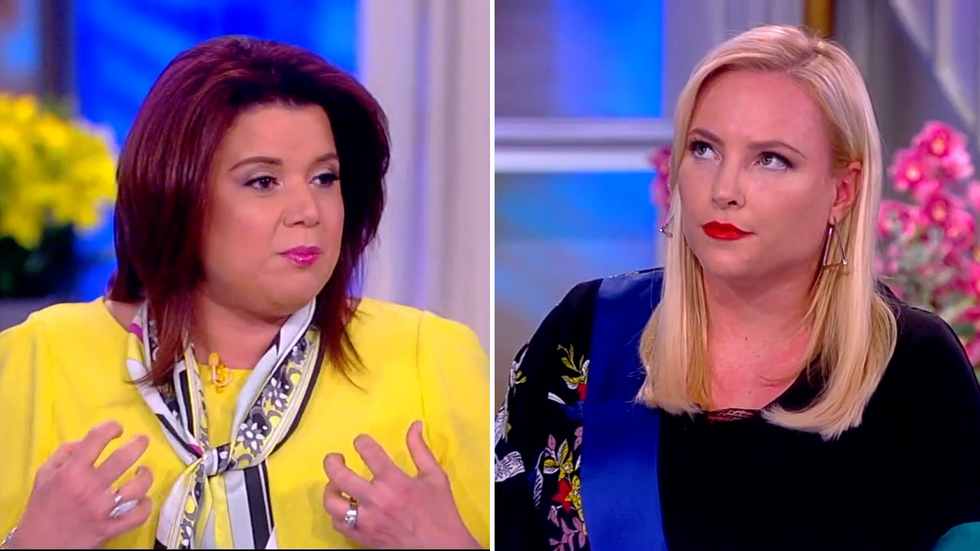 The View co-hosts Ann Navarro and Meghan McCain on Thursday battled about the best way to prevent school shootings.

"Nothing should be off the table," Navarro said during a discussion about school shootings. "And definitely assault weapons ban should not be off the table. We need to stop tiptoeing."

Noting that she was the "only NRA member at the table," McCain complained that NRA spokesperson Dana Loesch was treated badly during a CNN town hall on Wednesday about the mass shooting in Parkland, Florida.

"There are 7,000 people there in a community that is raw from a crime that just cost 17 innocent lives," Navarro said. "They are there and they are venting their emotions. That place was full of students, it was full of parents who've lost their children."

At the mention of grieving parents, ABC cameras caught McCain appearing to roll her eyes.

"You can't ask them to be restrained," Navarro continued, "and to hold back their emotions. It's just too damn raw."

"I know they are raw," McCain said angrily. "I also know that Dana Loesch is a friend of mine and I felt like -- if we are going to have a respectful conversation between Second Amendment rights supporters and people who are on the complete opposite of it who can't be yelling that you're a murderer."

McCain later denied that she was rolling her eyes.

@EWDolan I was looking at the monitor - and i repeatedly said on air how much respect i have for the teenagers and their activism.
— Meghan McCain (@Meghan McCain) 1519321901.0