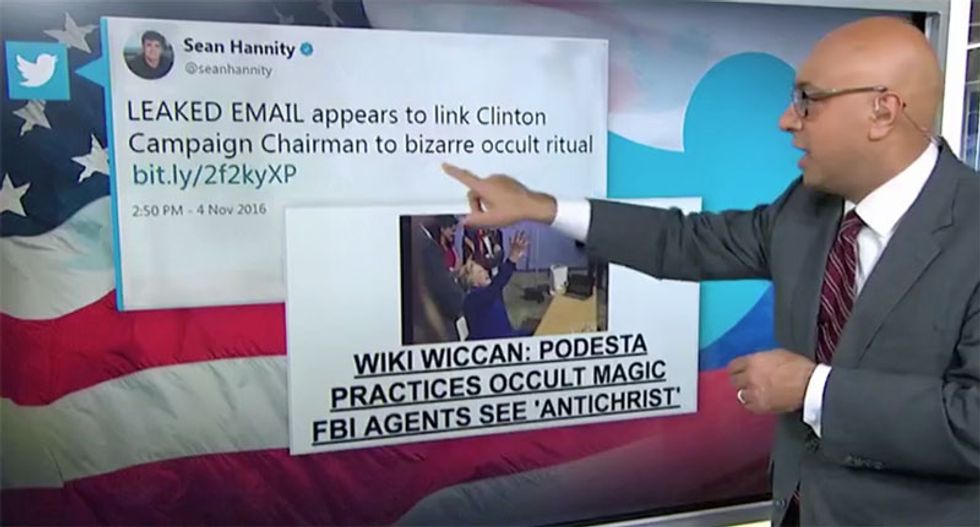 MSNBC host Ali Velshi called out Fox News personality Sean Hannity on Tuesday for pushing a conspiracy theory created by a Russian troll farm, the weekend before the 2016 presidential election.

NBC News discovered how the Russians were able take advantage of America's existing right-wing echo chamber to smear Democratic Party nominee Hillary Clinton with charges of satanism in the home stretch of the campaign. The reporting was based on 202,000 tweets were recovered from 2,752 Twitter accounts the House Intelligence Committee confirmed as Russian trolls.

"I want to dig in a little more and show you exactly how the Internet Research Agency, this troll farm for Twitter was so influential," Velshi explained.

"Take a look at these popular people that falsely accused Hillary Clinton and her campaign chair of being involved in a satanic ritual called spirit cooking," he reported. "These lies spread so far, it showed up on the Drudge Report and in Sean Hannity's account."

"This is kind of crazy stuff," Velshi concluded.

"You don't know who to believe or what to believe. That's one of the primary goals," Popken explained. "You don't know what's real or what's not. Don't trust anyone, return to your tribal groups, stop communicating, and just break down and weaken the American conversation."