WATCH: NRA-loving sheriff goes down in flames when confronted by Parkland teacher who doesn't want to shoot anyone 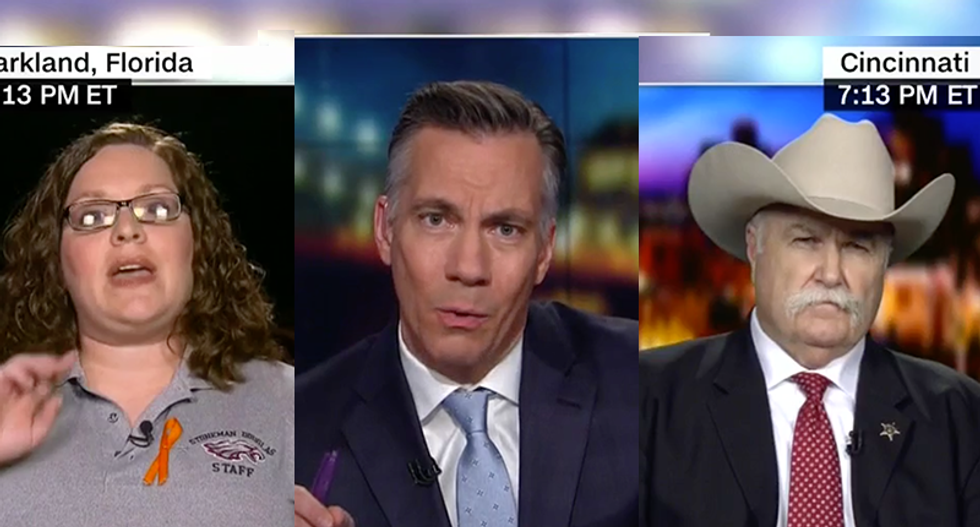 Lerner explained that there is no reason that she as a teacher should all of the sudden be security guards on top of everything else.

"I have no desire to own a gun, shoot a gun, carry a gun, touch a gun," she told Jones. "I don't think my coming to school with a gun would have changed anything. I wasn't in the building. I'm in building six, not building 12. So, if I would have been on campus with a gun, there would have literally been nothing for me to do."

Fill-in host Jim Sciutto asked if she would have "felt" safer if she had a gun, but she still said she would not.

"I don't need to have a gun to keep me safe," she said. "I knew the SWAT team, FBI, Broward Sheriff'sOoffice, local offices were here securing the campus would keep me safe. That made me feel safe. If I had been in my classroom with 15 students, I wouldn't have used it. I didn't see the shooter. I heard the shots when I went outside. But having a gun would do me no good."

Lerner went on to say that even if she had a gun she would likely have had it locked up. So, the presumption that somehow she would immediately be able to pull a weapon and take a guy out is absurd.

"If I had a gun on campus, it would have been locked in my closet, and if somebody had come in the room, in the time it would take me to get my keys and open my closet I would would be dead," she explained.

Jones said that the only solution is to gives teachers guns because police can't arrive in time to kill the suspect.

Sciutto argued that there was an Armed Resource Officer (SRO) and trained uniformed guard. Neither of them took the shooter out.

"Listen, I don't want to attack this one person too much," he said. "I spoke to a U.S. retired U.S. general tonight who commanded troops in Iraq and said that reaction to violence is not uncommon. I mean, if the armed trained uniformed security guard at Parkland didn't do it, why would we expect teachers like Sarah or others to be that frontline responder?"

Jones said he wouldn't expect Lerner to be a frontline responder. He said he did expect the officers there to be. He didn't have a solution for the fact that so-called "good guys with guns" were unable to stop the shooter.

"So, just for argument sake, sheriff, if I were to have a gun and carry it at school and this happened in the cafeteria where I am not, how am I helping?" she asked. "If someone comes into my classroom and I'm on the other side of the room not near my gun, how is the gun going to help keep me safe? He's going to shoot me before I can access my gun?"

The sheriff conceded that there's no way to keep her safe if someone comes into the classroom to shoot her when she has her gun in the closet.

"Only thing to do is beg for your life or wait for the police to get there," he confessed. "You have people that are trained."

"So, if I'm going to be shot anyway, then why do I need to carry a gun?" she asked, cutting in.

"Because you'll save the lives of other students," he tried to claim, after just admitting nothing would save her. "If you had the gun you wouldn't be shot."

However, Jones just admitted that if she did have a gun and had to go to the other part of a classroom and unlock the gun she would be shot and killed before anything could be done. If she had a gun and the shooting happened in another area of the school, she wouldn't be able to get her gun and then find the shooter and subdue him.

All Jones could do is pretend he didn't agree that nothing could be done. The two "agreed to disagree."