WATCH: Rick Santorum goes down in flames when CNN's Chris Cuomo fact-checks him on gun laws 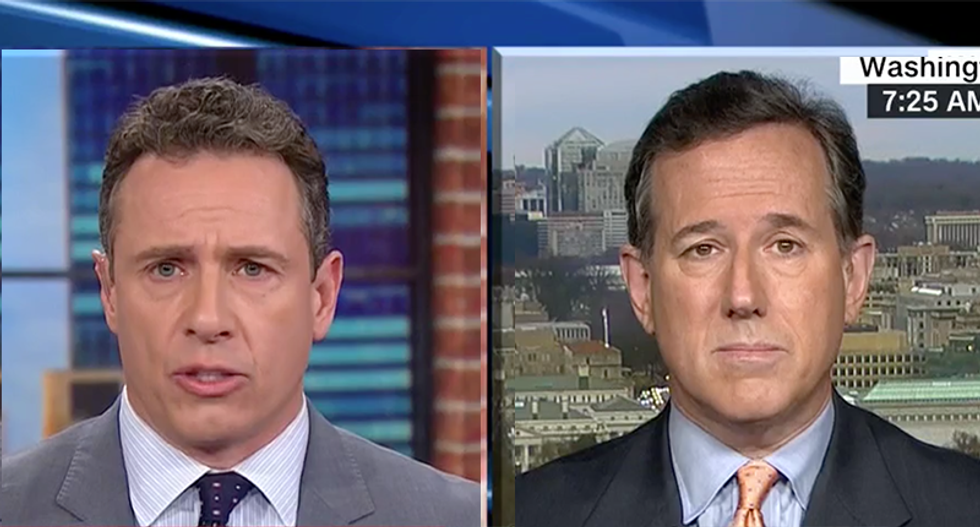 During a discussion about the solutions in wake of the Parkland, Florida, mass shooting, former Sen. Rick Santorum (R-PA) argued that laws are already in place to keep guns away from the mentally ill. CNN host Chris Cuomo had to fact-check the senator with an A+ rating from the NRA in real time.

During a Sunday discussion about mass shootings, Santorum argued that the problem is that "fatherlessness" is an epidemic that contribute to the mass shootings. On Monday, Cuomo took issue with it.

"The fact that you have culture issues at play in a lot of different facets of behavior in our country," Cuomo began. "But if you look at places around the globe, the only metric that distinguishes the United States is the ease of access of guns and the number of guns. Whether it's mental health or the family unit, the nuclear unit, the only metric that matters are the guns and who gets them. How can that be the priority?"

Santorum conceded that no one wants to put guns in the hands of the mentally ill.

"Then why haven't the laws changed?" Cuomo cut in to ask.

"How have the laws changed?" Cuomo asked. "None of that stuff is captured. You have to be adjudicated mentally ill. You know all of this stuff. There's a whole universe of possibilities of behavior that is not captured by the current system."

Santorum cited Connecticut's laws but Cuomo noted that law was a state law. If one state doesn't allow guns for the mentally ill, someone can go to another state to purchase the weapon legally and bring it back into the state that outlaws it. On the federal level, President Barack Obama signed an executive order that barred mentally ill people from having access to guns. One of President Donald Trump's first executive orders was to override that order.

Santorum went on to say that "guns save a lot of lives in this country." He blamed gun-free zones, saying schools are a big waving flag indicating that anyone with guns can attack it and not be faced with any opposition.

Cuomo noted that it isn't accurate as school shootings are a very small percentage of the mass shootings and shootings in general. Similarly, this school did have a gun in it with the deputies and the resources officer that were at the school while the shooting was still going on. As a fact check, both Santorum's previous office in the Senate and the White House are gun-free zones that have ample security. It hasn't stopped people from shooting at the White House, ramming their car into barriers or jumping the fence of the White House with weapons.

Watch Santorum go down in flames below: