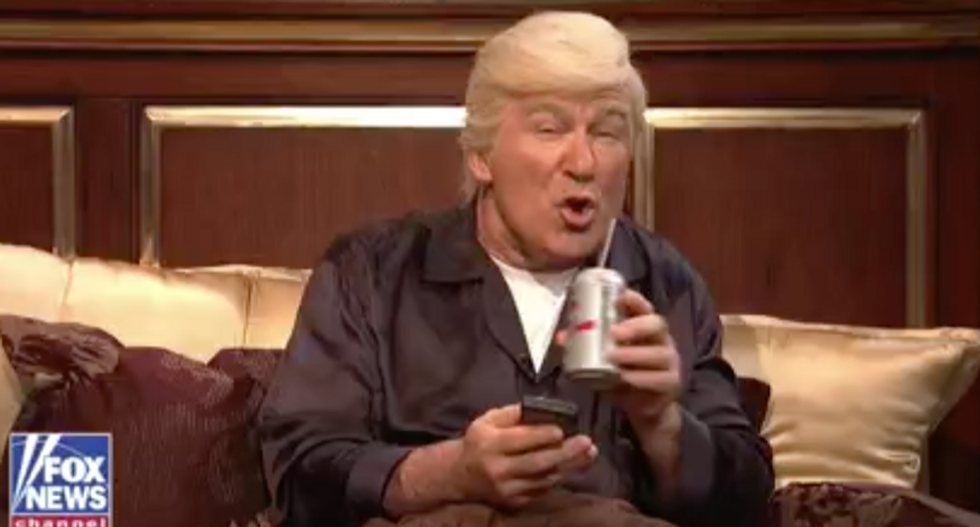 To kick off the skit, “SNL’s” Ainsley Earhardt welcomed viewers, especially one who may be “laying in the Lincoln bedroom tweeting with an egg McMuffin on your chest.” She then brought out White House Communications Director Hope Hicks, played by Cecily Strong, to discuss the latest developments of the Russia investigation.

Strong’s Hicks told “Fox and Friends” the show plays “at full volume during every meeting.” She then revealed that she’s unsure of her role at the White House.

“There are no real jobs here, you know?” Hicks said. “Everyday feels like when a group of strangers suddenly works together to push a beached whale back into the sea.”

Hicks later referenced reports special counsel Robert Mueller is zooming in on her role in a possible obstruction case against the president. “People are treating me like I’m the Gossip Girl of the White House,” Hicks complained.

Trump later called in to “Fox and Friends” from his bed in the White House, telling the co-hosts, “If you’re wondering why I’m so out of breath it’s because I’m doing my p90X workout” as he tossed a McDonald's wrapper off the bed.

He then thanked the cast for giving the daily intelligence briefing, before boasting that his State of the Union address was “better than Martin Luther King’s I Dream of Jeanie speech.”

Turning to the Nunes memo, Trump thanked his “sweet little house elf" who he said is "so close to earning his freedom.”

“Who’s the most innocent person of all time?” Trump later asked the “Fox and Friends” host.

Watch their responses below: