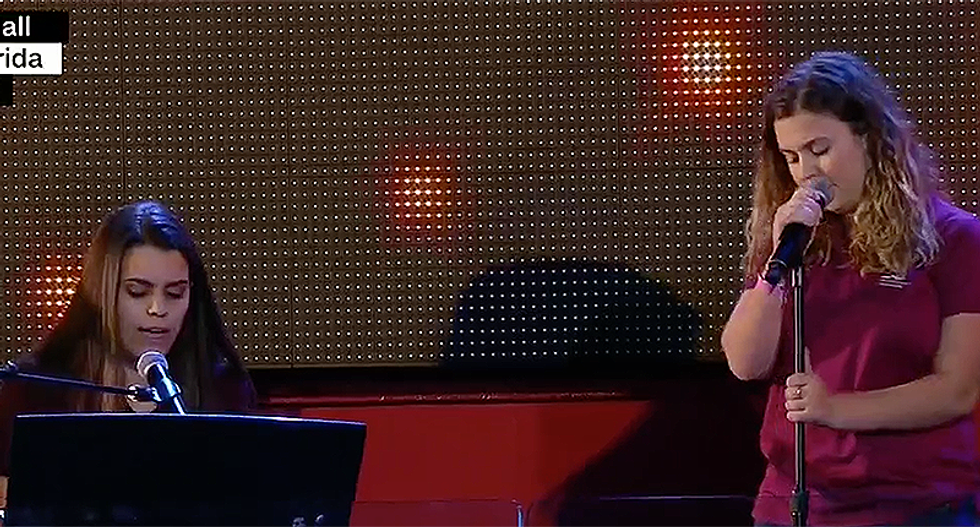 "You're not gonna knock us down. We'll get back up again," the chorus rang throughout the arena. "You may have hurt us but promise we'll be stronger, and we're not going to let you win. We're going to put up a fight. You may have brought the dark but together we will shine the light."

As another student played the piano, those in the audiences turned the lights on their phones and stretched them above the crowd to shine their own light.

"We're gonna stand tall," she sang. "Gonna raise above all the voices so we never ever fall."

Another student sang a warning, "we're done with all your little games. We're tired of hearing that we're too young to ever make a change."

The encouraged everyone that they could "hug a little tighter, love a little more. Laugh a little harder. We can stand up and roar."

Each student stood at a microphone with a call to action. "We refuse to be ignored by those who will not listen," one young woman said.

"There are so many things you can do to become involved," another said.

"Reach out to your Congressman. Mail, call and tweet," yet another student said.

"The smallest of words can make the biggest difference," one young woman explained.

"Be the voice for those that don't have one," a young man said.

"Together we have the power to change the world around us," the final student urged.

Watch the moving performance below:

On Monday, Mother Jones revealed that a crucial early pusher of the QAnon conspiracy theory — which holds that the government is secretly controlled by a cult of Satanic child-trafficking cannibals — ironically once ran a site infested with illegal child sexual exploitation, and resisted all warnings and efforts to clean it up.

Specifically, the report took a deep dive into how Jim Watkins, the owner of the QAnon-heavy site 8chan, managed content moderation at an earlier website that had similar problems.