WATCH: Trump and Kim lookalikes cause a stir at Pyeongchang Olympics 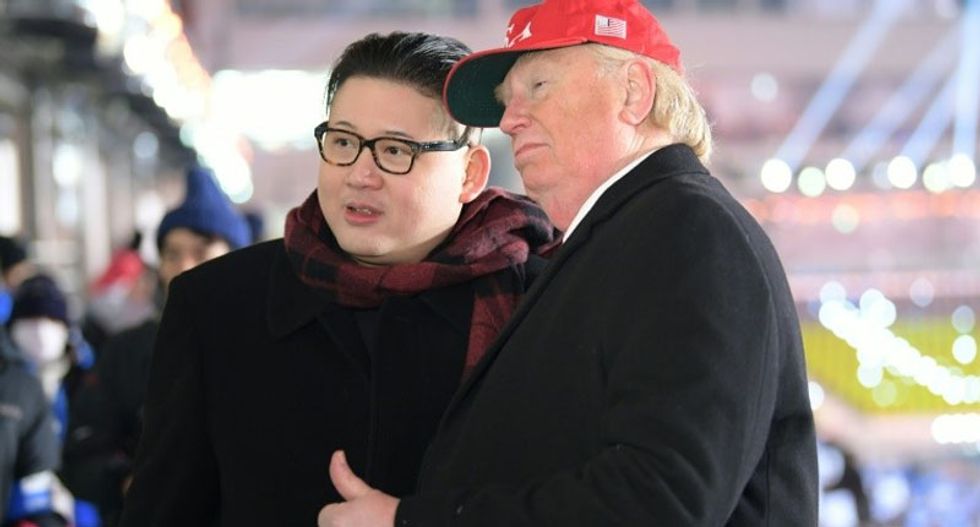 The impersonators of Kim Jong Un and Donald Trump have thanked officials for their "very professional" behaviour at the opening ceremony. (AFP / MOHD RASFAN)

Lookalikes of Donald Trump and Kim Jong Un who caused a stir at Friday's Pyeongchang Olympics opening ceremony have thanked organisers for their tender loving care.

The feuding 'world leaders' sparked excitement when they infiltrated the press area before being tackled by security.

But the Kim impersonator, who goes by the stage name of Howard X, insisted they had not been ejected from the stadium, merely escorted back to their correct seats.

"We tried to sneak into the media section so we could wave to the athletes," he told AFP on Saturday.

"They didn't kick us out, we had tickets. A bunch of journalists were chasing us so security took us outside so we could get to our seats," the fake Kim added.

"They were very professional and just doing their jobs. They even provided us with an entourage, so we looked like the real thing and it caused even more of a commotion."

Fake Kim admitted that he and Trump substitute Dennis Alan had failed to get close enough to interact with athletes, including the two Koreas who marched together behind the blue-and-white unification flag.

They were also not able to get close to the VIP area, where US Vice-President Mike Pence and the real Kim's sister Kim Yo Jong were in attendance.

But the imposters were given a warm reception by stunned onlookers, according to Howard.

"People told us it was really funny," he said. "Even the security guards were asking for selfies."