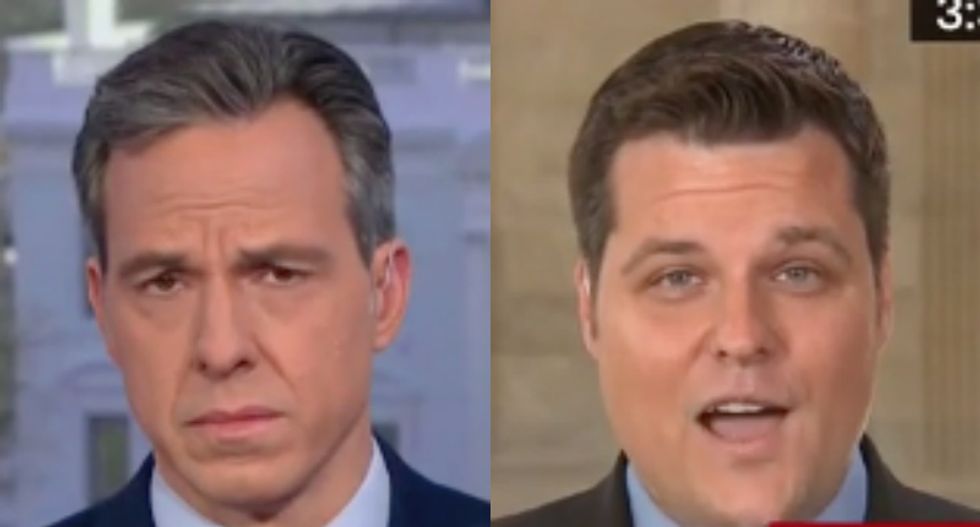 In a heated exchange between CNN's Jake Tapper and Rep. Matt Gaetz (R-FL), the host slammed the congressman for making claims that have no basis in fact.

The crux of the argument between host and interviewee stemmed from Gaetz's repeated assertion that the infamous Fusion GPS dossier was the cornerstone of the FBI's decision to surveil Trump campaign operative Carter Page— a claim disputed by the House Intelligence Committee's memo, which lists intelligence about former staffer George Papadopoulos as the reason it obtained surveillance warrants.

"I would point to the statements of [former FBI deputy director] Andrew McCabe before the intelligence committee," Gaetz said. "Mr. McCabe said that the dossier was absolutely essential and but for the dossier, there would no FISA warrant to spy on Americans."

"That warrant is what [House Intelligence Committee Chairman Devin] Nunes claims McCabe said," Tapper rebutted, "but I'm talking about an investigation, not just a warrant in October, but the investigation that began in July."

"This counterintelligence investigation, according to the Nunes memo, begins in July because George Papadopoulos, as we know, said something to an Australian diplomat about how the Russians had dirty on Hillary Clinton," he continued.

Tapper once again fact-checked Gaetz when he insisted for the second time during their exchange that the FBI used a Yahoo News article as a flimsy attempt to corroborate the Fusion GPS dossier.

"Congressman, you're asserting a lot of things I don't know to be demonstrable fact," he said.