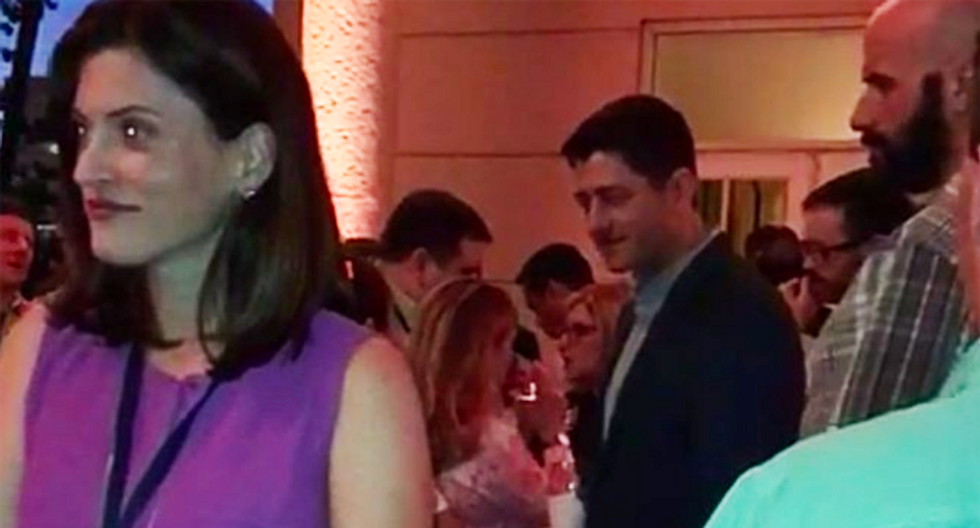 Two activists were removed from Paul Ryan’s weekend fundraiser in Key Biscayne, Florida for confronting the Speaker of the House about gun reform.

“Maria Thorne, a Key Biscayne activist, said she noticed motorcade traffic clogging up her commute home from her job as a fifth grade teacher at iPrep Academy,” the Miami Herald reported, “where she spent the day reassuring scared students that she could keep them safe from a shooter.”

After Thorne heard a rumor that the motorcade belonged to Ryan, she and a friend decided to attend the local event. The Herald confirmed that the National Republican Congressional Committee lists a 2018 Winter Meeting on their website, and the Speaker’s representative confirmed his attendance.

Thorne said she found Ryan in the middle of the room — “I shook his hand and everything,” she said — and introduced herself as a teacher and Key Biscayner.

At that, Thorne said, Ryan told her he “didn’t want to talk politics” or argue. When Thorne tried to continue, security escorted her out. She chanted “No more guns!” on her way out the door, she said.

Activist group PerSisters posted video and photos of the event on Twitter:

This is @SpeakerRyan's version of Thoughts and Prayers. Odd, it looks like a donor event in the tropics.… https://t.co/dMCaxOW2FK
— PerSisters (@PerSisters)1518829629.0

A 19-year old gunman killed 17 people and wounded 14 others in the country’s latest mass shooting this week. As of October 2017, Speaker of the House Paul Ryan has accepted $171,977 from the NRA.

“I’m tired. Nobody listens,” Thorne told the Herald. “Everybody tries to twist it around. I’m a registered Democrat, but right now I just don’t want anybody that’s been fed by the NRA, otherwise this is never going to stop.”