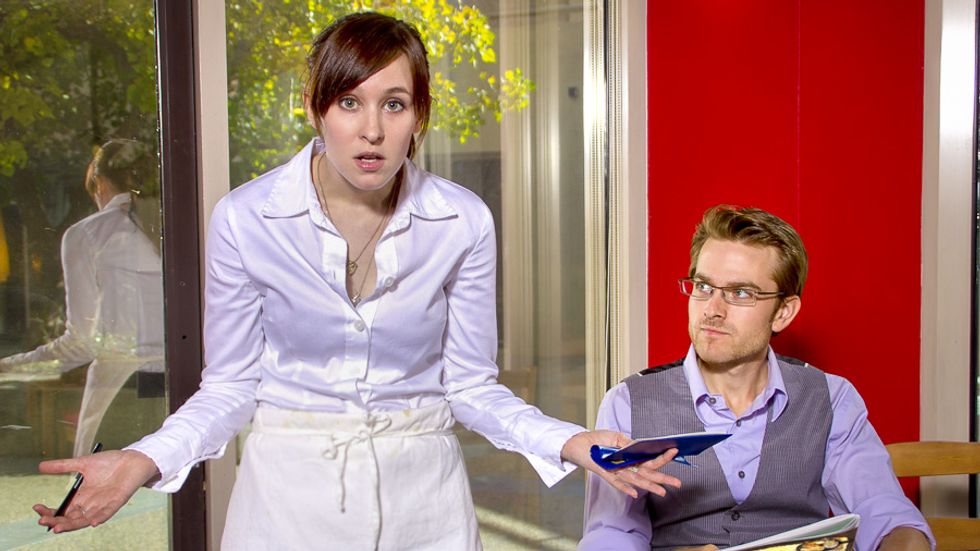 In the era of Instagram, Yelp, OpenTable, and a seemingly endless flow of food blogs and amateur food critics, it's nearly impossible to go anywhere without a restaurant recommendation. But how do you know that the cute little Italian place your cousin swore served the best meal she ever had is worth dining at, especially when you walk by and something looks amiss?

Unsolicited advice aside, you may find yourself in a town or city where even the local paper lacks a food critic, or worse, your phone is dead and you can't look up a place to grab a quick meal. Hot lists and arbitrary, user-generated ratings aside, we asked the experts how they can tell a restaurant should be avoided, within a few minutes of getting seated (or briskly pivoting away at the entrance).

If your server doesn't treat you like a human being, this may be your cue to find somewhere else to eat. "I pay attention to the friendliness of service," Ken McCoy, owner of Farmhouse Hospitality's The Flying Cock and The Horny Ram, says. "It's irksome when my server or bartender walks up and goes straight to, 'What can I get you?' A little small talk goes a long way." An understaffed restaurant may not leave servers with a lot of time for pleasantries, which is not a character judgment, but rather a hint that the service you're about to get will be less than attentive. Consider returning another time when more servers are on the floor.

The reason to flee may be in the details. "Look at the ketchup bottle," Darron Cardosa, aka The Bitchy Waiter, advises. "If you remove the lid and see a thick layer of crust, it's a good indication that the bottle has been there for far too long without a server ever wiping it down, or that it has been married with other bottles of ketchup, which is just as disgusting. It's a sign that someone does not care."

Not a ketchup type of place? Cardosa recommends looking at the cleanliness of items that typically don't go through the dishwasher—salt and pepper shakers, sugar caddies, menus. "If those are dirty, there is a good chance there are plenty of other dirty things in the restaurant as well," he says.

That letter displayed on the front window is probably not a critic's grade, but rather a health inspector's rating of cleanliness and hygiene. In New York City, an A or B is generally considered fine (the rating can be lowered for pretty arbitrary reasons, many of which you probably don't even practice while cooking at home), but a "grade pending" sign is cause for concern. "That means they received a grade they did not like and the restaurant has decided to fight it," Cardosa says. "It could be lower than a B, and you would never choose to eat there if you knew they had a C."

Maybe that gorgeous photo of the rose-shaped avocado toast helped you pick your brunch spot, but look beyond the filtered images to evaluate the worthiness of a restaurant. "As much as I dislike Yelp, it can be a helpful way to learn about the level of hospitality at a restaurant," Cardosa says. "However, don't just rely on the reviews written by customers; look at the responses from the restaurant itself. Is the owner combative of bad reviews or appreciative of good ones? Sometimes, restaurant owners can tell you what kind of experience to expect just by the way they react to reviews on social media. If they respond poorly online, they probably aren't so nice in person either."

Ornella Trattoria Italiana, in Queens, is known for printing out its negative Yelp reviews and posting them in the bathroom. While you can't always guarantee a sense of humor before visiting the restaurant, evaluating the tone of the owner's communication is certainly helpful.

5. Pictures of food on the menu.

If you're in any major city, assume that any restaurant adding pictures of its food—or worse, stock photos—is trying to appeal exclusively to tourists, especially those who may not speak the same language as residents of the city and may rely on photos to decode a menu. You're probably better off going to any other picture-less restaurant and just guessing what you want from the menu. If you're someone who wants to know what your food looks like before you eat it, check out images on social media and food-ordering websites like Caviar, Uber Eats, MealPal and Seamless.

This seems obvious, but don't give the benefit of the doubt to a completely empty restaurant; there's probably a good reason no one's in there. I recently ate at a restaurant in my neighborhood that I'd ordered takeout from many times, and though I was enjoying a late lunch, I was shocked to find the entire dining room empty. Rushed, clumsy service and a lack of heat and amenities began to show how the restaurant had stayed in business for several years—people use it for takeout and nothing else. Read the room.

Unless you have $100 bills falling out of your pockets, consider skipping the four-figure dinner date. Restaurants that charge absurd amounts for a meal are usually all hype, and though they may serve good food in a nice room, there are better, more affordable options. As someone who is trying to kick an expensive (and stupid) habit of eating off the World’s 50 Best list, I'm painfully aware that spending all your disposable income on a meal is rarely, if ever, worth it.

If your heart is set on dining at a "destination" restaurant, ask friends and family if they've been, if they'd recommend it and how to do it right. Otherwise, it's a waste of cash that could be enjoyed on multiple meals out.

Your parents (probably) didn't make something special for each person at a family dinner, and you shouldn't expect a restaurant to do so either. Sure, a vegan, vegetarian or gluten-free item is standard, but when cuisines start to meld, overlap or contrast, you can be sure the chef isn't equally proficient in cooking food from several continents.

If your favorite spot starts doing things differently, you should start getting suspicious. Why mess with a good thing? "When restaurants start making unusual changes, it's time to stop going," says Laura Longwell, blogger at Travel Addicts. "Those changes could be limiting hours, closing for lunch when they had previously been open, closing for an unexplained period of time (such as a multiple-week hiatus), dropping out of online reservation systems, or no longer accepting credit cards. Those are red flags that something more systemic is happening."

Of course, there may be explainable reasons for the change—maybe the chef just had a baby and wants to maintain a work-life balance. Ask about any differences you notice. But if the restaurant can't provide an upfront answer, it may be time to change your dinner plans.