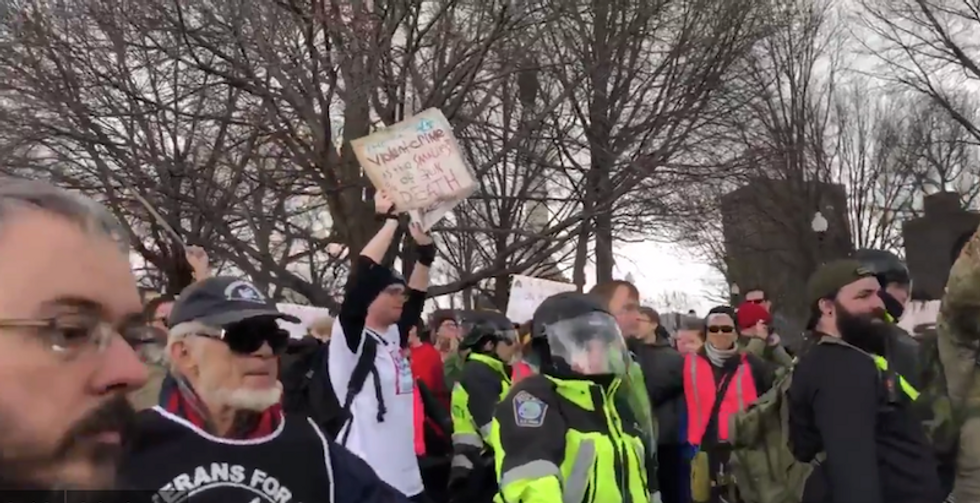 Counter-protestors at a #MarchForOurLives rally/Screenshot

Nationwide protests swept America today, as a teenager-led protest against the epidemic of mass shootings.

But as with most protests, there were counter-protests. Gun-lovers in red Trump hats showed up at many of the rallies carrying AR-15s and sidearms, an effort they dubbed "March For Our Guns."

A search of social media finds images of heavily armed people—including Utahans in a military-style vehicle with a mounted machine gun—showing up to rallies.

And yet none have reported to have been marred by violence and the speakers were not intimidated.

Here are some of the counter-protestors who showed up around the country.

A man in Austin showed up carrying a gun, a Gadsden flag and apparently wearing ear protection so he wouldn't hear what the people he came to protest had to say.

Another man showed up in Austin with an AR-15.

In Fort Worth, police surrounded a counter-protestor taunting children using a megaphone.

In Boston, police also surrounded the right-wing counter protestors as they made their way around the rally.

In Phoenix, a man with an AR-15 said that if the teens attack, "I will attack back."

Some in Utah also had military-style vehicles mounted with machine guns.

A counter-protest to the #MarchForOurLives event in Utah, where protesters are calling for armed teachers and speak… https://t.co/E4R1s8rJbo
— BuzzFeed News (@BuzzFeed News) 1521910058.0

In Pennsylvania, a man showed up with an assault rifle and his dog—the dog's head was hung low.

At a #MarchForOurLives march in Greensburg, PA. I wonder who this gentleman is & what his family, friends, colleagu… https://t.co/7ceinkYk4L
— TXWomenRESIST (@TXWomenRESIST) 1521918590.0

In El Paso a small group of counter-protestors included a girl in a pink hoodie who did not appear to be completely thrilled to have her photograph taken.