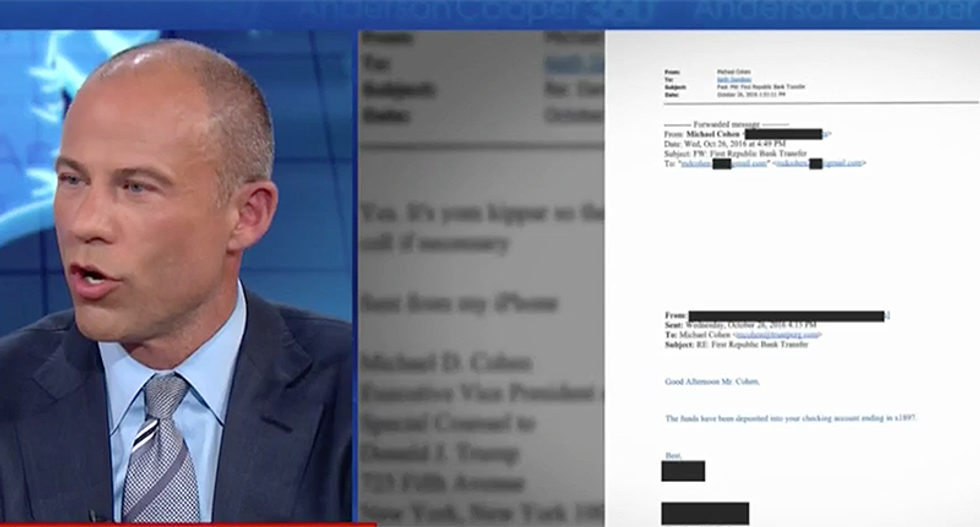 In a Friday evening interview with Anderson Cooper, Stormy Daniels' attorney Michael Avenatti revealed a new chain of emails that create a paper-trail of the transfer for the $130,000 payoff. The email also has Cohen admitting that he was speaking on behalf of Trump.

Avenatti also noted that there was language in their exchange of emails that seems to refute the claim that Cohen was acting of his own accord and not on behalf of the Trump Organization or Trump himself.

He also refuted the idea that the arbitration was a valid legal standing to move forward. He explained the case was brought by an LLC and not by Trump. Avenatti also questioned whether Cohen is licensed to practice law in California, where the case moved forward. If Cohen is not barred in California, it is illegal to act as an attorney in the state.

"This is yet another e-mail that shows that throughout this negotiation period, this period during which his attorney, Cohn, was negotiating on the president's behalf," he explained. "He was routinely using his e-mail address at the Trump Organization and his e-mail signature block to identify that he was doing this on behalf of the Trump Organization. And if you look at the e-mail, the last e-mail in the string, it talks about how the office is closed for Yom Kippur. And, if I can set the stage, mid-October was around the time period that the payment was to be made. It ultimately was not made and the deal fell apart for a while."

He explained that that nugget of information is important because if Cohen was acting of his own accord and not on behalf of Trump, it wouldn't have mattered whether the Trump Organization office was open or not.

Another email exchange walks through the fact that the payment had been deposited into Daniels' account.

"We believe this is pivotal for the following reason: the initial e-mail in the string, which is at the bottom of the page is an e-mail from a representative of the alerting him that they have effectively laid out his wishes," Avenatti said about the payment to Daniels. "He turns around then and forwards that e-mail to himself. He then turns around and forwards that to his personal e-mail account which is the next e-mail in the string above that."

"Why would Michael Cohn then feel the need to forward that e-mail to himself to his private e-mail address to then communicate with Stormy Daniels' attorney?" Cooper wondered.

Avenatti said he didn't have an answer.

In the second half of the interview, Avenatti explained that the payment to Daniels was done via wire transfer. Banks are required to file a Suspicious Activity Report (SAR) for transfers over $9,000, and that can be tracked because the Internal Revenue Service requires specific details be filed for large transfers. The federal government would have that information and Avenatti explained that Trump and the IRS could release the information on where the wire transfers all came from. If they wanted.