Chris Cuomo mocks Trump’s ‘flip-flop’ on border wall: ‘It was always about playing to the crowd’ 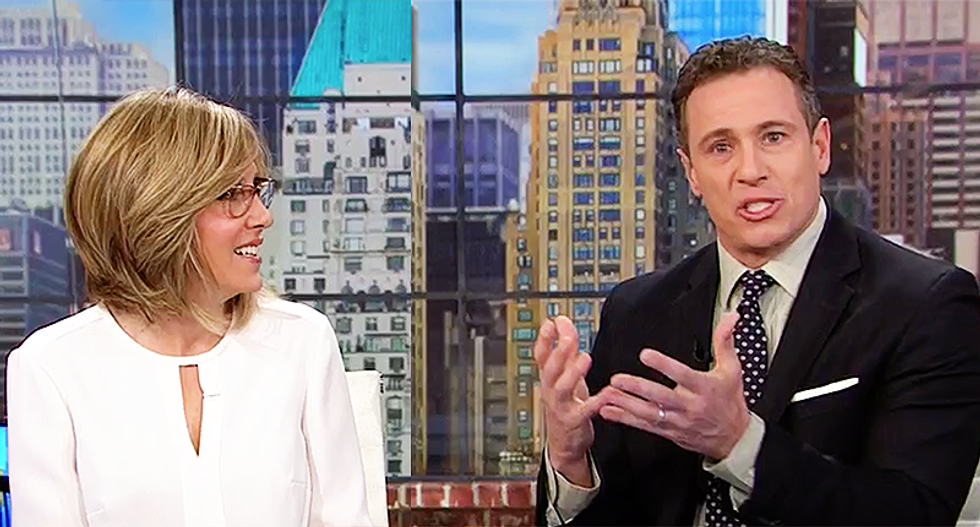 When President Donald Trump told his supporters that Mexico would pay for his expensive border wall, it wasn't entirely accurate. In fact, according to CNN's Chris Cuomo, it has become "a BS situation."

After playing a series of clips with Trump leading his supporters in chants about building a wall that he promised would be paid for by Mexico, the panel discussion revealed the truth.

"When he says Mexico will pay for the wall -- what he really means is the Pentagon," Cuomo said. "Now, the president, distancing himself from the campaign rallying cry. The president has a new idea. Let the Pentagon pay for his wall. The president even discussed it in a private meeting with with with House Speaker Paul Ryan (R-WI)."

Daily Beast editor John Avlon noted that to Trump and others the wall is about "security," but he said it will ultimately be taken out of the budget that would normally help military service members.

"We all remember the call from the campaign who will pay for the wall? The troops," Avlon answered. "Look, it's just a flip-flop. It is about bit of hypocrisy. That line about Mexico paying for it was always about playing to the crowd."

He said the president was actually frustrated that the new budget bill doesn’t fully fund his border wall. Instead it only has $1.6 billion for shoring up fencing. There will be no actual wall.

"In this kind of BS situation that we're in about the wall," Cuomo began. "You've got to remember where it came from. This was never a signature promise until they gave it to him."

Cuomo was referencing the campaign pledge that allies Roger Stone, Rick Gates and Steve Bannon crafted for him. It proved to be successful, but political experts agreed it was never going to happen. Mexican leaders also attacked Trump multiple times for the claim they'd pay for it, assuring it would never happen.

"The idea of a concrete new wall that the vice president is out there reinforcing, cementing the idea, if you will, that's what they want," Cuomo continued. "The end run is $1.6 billion or whatever it is, but not for this new wall. So, I guess, they will reinforce the old wall and then build the new one."

Experts and those familiar with the border noted it never made sense to build a wall across the Mexico border.