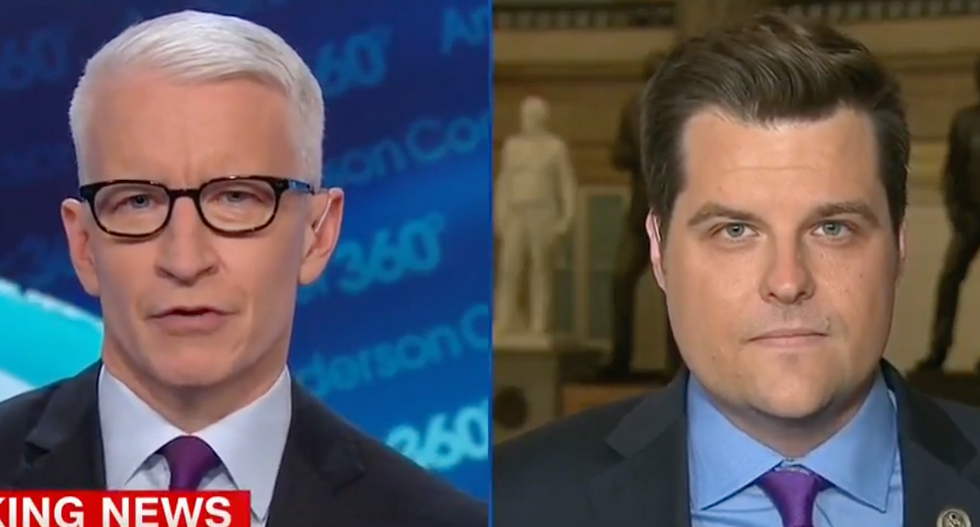 CNN’s Anderson Cooper on Monday hammered Rep. Matt Gaetz (R-FL), a vocal Donald Trump supporter, over his assertion there may be a “cabal at the top echelon of the FBI” working to take down the president.

Gaetz, who’s called for Jeff Sessions to fire Robert Mueller (despite the attorney general's recusal from the Russia probe), told Cooper it’s time to “wrap up” the special counsel investigation “and move onto tax cuts and other important things for the country.”

“We're 14 months into the Trump presidency,” Gaetz said. “So let's assume those who are the president's biggest critics are right and there was collusion. We shouldn't wait any longer to see the evidence. Let's find out what the evidence is as we stand here today.”

Cooper asked Gaetz if he believes “there’s some sort of cabal at the top echelon of the FBI” that’s out to get Trump.

“I think we need to look into that question,” Gaetz replied.

Cooper pointed out Gaetz’s theory mirrors an earlier assertion that he and other Trump-backing congressmen shared—namely, that there's a FBI “secret society” plotting the president’s downfall.

“It's a reasonable question to wonder why people at the FBI were referencing a secret society,” Gaetz told Cooper. “While there may have not been some formal incarnation of that, you may have had the very informal cabal that [Trump’s lawyer] referenced.”

“I think there's a lot more investigating to do, and it may very well be you had an informal cabal functioning in secret with a societal goal of hurting President Trump without any evidence,” Gaetz continued.

“That sounds like a massive conspiracy theory,” Cooper pushed back.

“There may have been a massive conspiracy at play,” Gaetz insisted.

“So just so I’m clear, you want to shut down special counsel Robert Mueller, who’s investigating the president, but create a new special counsel to investigate a potential cabal or secret society at the highest echelons of the FBI?” Cooper asked dryly.