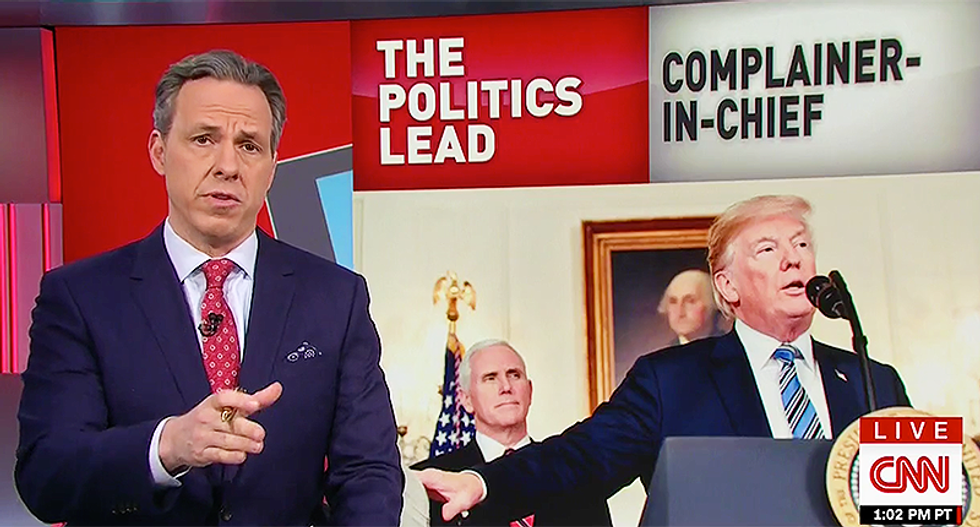 CNN's Jake Tapper spent the first portion of his Friday episode of "The Lead" calling out President Donald Trump's "fake news" claims during the so-called press conference before he signed the spending bill.

Tapper noted that Trump told his staff at the last minute he wanted a press conference for the signing of the bill, and they were forced to scramble to get it done. However, the news conference was nothing more than an "airing of grievances," according to Tapper. "A fake news conference," he called it.

"That wasn't even the most unusual aspect of the non-news conference news conference," he continued. "Nor was it a bill signing, although the White house billed the event as that as well. The bill was not signed during the event. This was more of an airing of grievances. Festivus style."

He played a clip of Trump expressing his frustration with the bill that he didn't want to sign and had pledged he would veto.

"President Trump is not wrong that the appropriations process on capitol hill is pathetically broken and it has been for some time," Tapper confessed. "But the president's proposed remedies seemed a bit off."

His first example was that the next bill they send him will get a "line item veto" for spending.

"So, one small problem with this, there was a Supreme Court case about the line-item-veto, it was back this 1998, twenty years ago" Tapper explained. "Clinton vs. The City of New York. The line-item-veto, 20 years ago was deemed unconstitutional. President Trump surely must know that."

Trump's second remedy was that he wanted to see the senate get rid of the filibuster.

"Here's the thing: you're not going to get the U.S. Senate to ending the filibuster," Tapper explained. "Since the rules allow the minority power to have some power and every senator knows that soon enough, that could be them. Moreover is that really the problem with this bill? According to a senior Senate Republican aide, 'Ending the filibuster isn't the problem because the House Freedom Caucus crowd refuses to vote for any spending bills. House Republicans need Democrat votes.' And that's why the bill was how it was."

He went on to say that the GOP was also confused why the president was so upset about the bill since his staff was at the negotiation table every step of the way.

Finally, Tapper played the clip of Trump blaming the Democrats for preventing a deal on Deferred Action for Childhood Arrivals (DACA).

"OK, so, one other pesky little fact here: it is true the Democrats did not go with the deal offered to them by Republicans to fund border wall in exchange for DREAMers," Tapper explained. "But President Trump is the one that gave the DACA this self-imposed dead line. To sum up the news conference that was held: The president's continued battle with facts continues unabated, starting with the basics about what the event was, wing the legislation and ending with some basic misunderstandings of governance. it was an unusual signing ceremony torsion say the least."