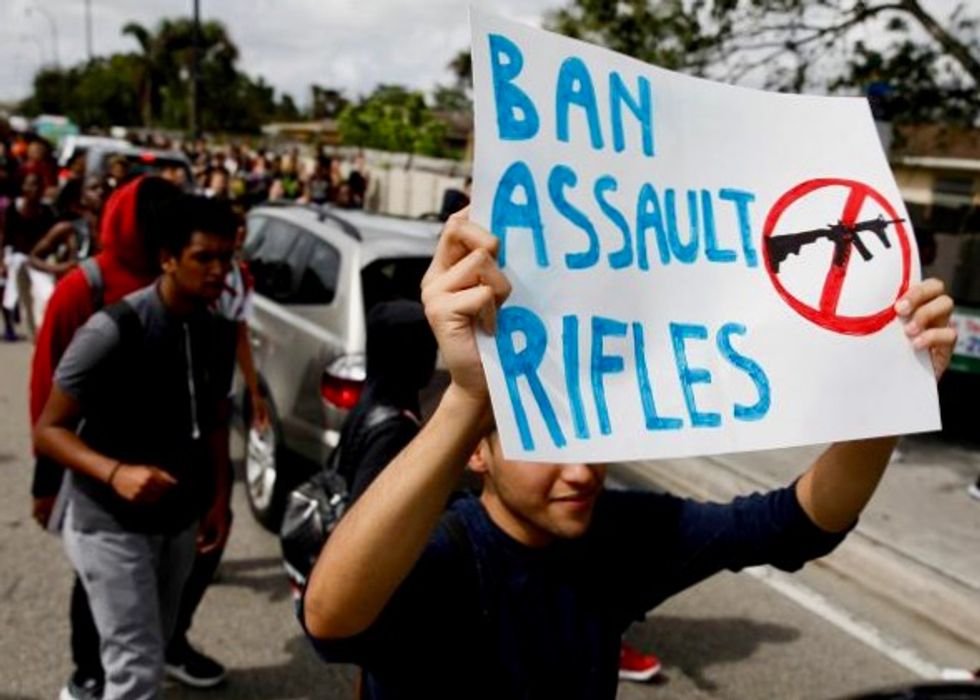 A makeshift memorial made up of 7,000 pairs of shoes will take shape on the lawn of the U.S. Capitol on Tuesday, as gun control activists dramatize the number of children killed in the United States by gunfire since the 2012 Sandy Hook school massacre.

The monument is being built on the day before a massive, nationwide walkout by students demanding tougher laws on gun ownership, part of a campaign that emerged after the killing of 17 students and staff at a Florida high school a month ago.

“This is really about putting the human cost of refusing to pass gun control at the doorstep of lawmakers,” said Emma Ruby-Sachs, deputy director of Avaaz, a U.S.-based civic organization that planned the shoe memorial. The Capitol is the home of the U.S. Congress.

Wednesday’s #ENOUGH National School Walkout, organized by the activists who helped plan the Women’s March in Washington for the past two years, will begin at 10 a.m. local time (1400 GMT).

Students across the country will walk out of their classrooms for 17 minutes to commemorate the 17 victims who lost their lives after the Feb. 14 shooting at Marjory Stoneman Douglas High School in Parkland, Florida.

The massacre was the deadliest school shooting since 20 children and six adults were shot dead at Sandy Hook elementary school in Newtown, Connecticut, more than five years ago.

The walkout has won the support from many school districts and civil rights organizations, including the American Civil Liberties Union. More than 2,500 walkouts are scheduled across the country, according to the organizer’s website.

Some schools will allow students to participate and have encouraged them to exercise their free speech rights under the First Amendment of the U.S. Constitution. A few have threatened to suspend students if they disrupt class by leaving.

“When students protest at schools, our school staff will respond appropriately and allow our students to be heard,” said Robert Runcie, superintendent for public schools for Broward County, Florida, where Parkland’s Marjory Stoneman is located.

About 1,300 people younger than age 18 are killed by gunfire in the United States every year, according to the U.S. Centers for Disease Control and Prevention.

Dozens of colleges and universities across the country, including at least three Ivy League schools, have said their application processes will not consider disciplinary action taken against high school students who engage in protests.

At the Capitol on Tuesday, activists and volunteers will begin at dawn placing 7,000 pairs of donated children’s shoes side by side in a trapezoid shape to commemorate those who have died since the Newtown massacre. Donors include actresses Susan Sarandon and Bette Midler, and talk show host Chelsea Handler.

The memorial is reminiscent of a monument on the Danube River near the Hungarian Parliament in Budapest commemorating thousands of people, including Jews, killed by fascists in the 1940s.

Many Canadian cities have marked the National Day of Remembrance and Action on Violence Against Women on December 6 with similar“shoe memorials.”