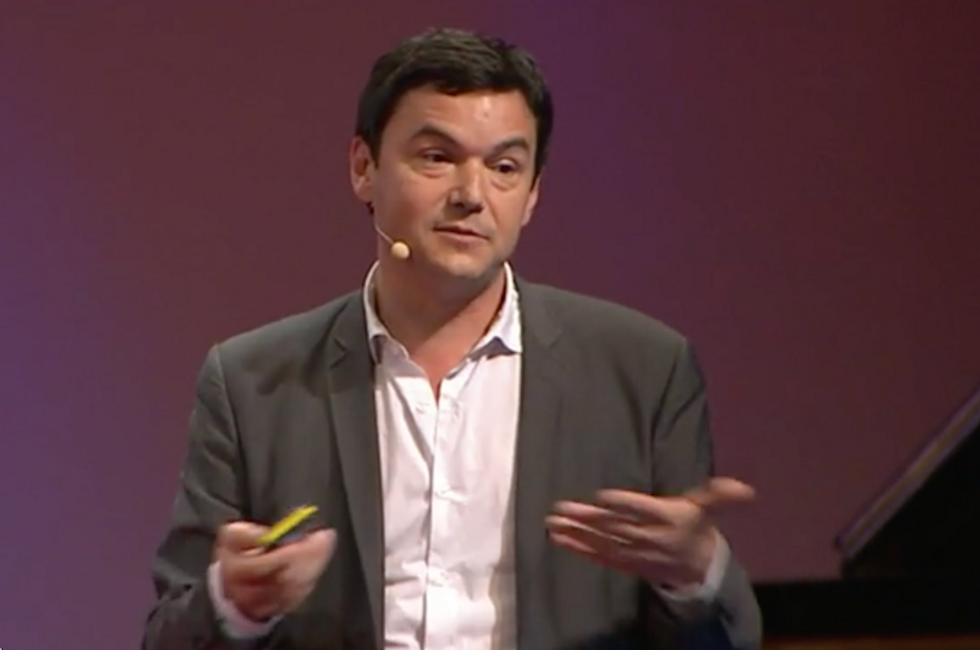 Would Bernie Sanders have won? French economist Thomas Piketty seems to think so.

The author of Capital in the Twenty-First Century, a New York Times best-seller and the most-bought book in the history of Harvard University Press, has published a paper that uses exit polling data to argue that embracing economic populism would power the left toward huge electoral wins.

The paper is called "Brahmin Left vs. Merchant Right: Rising Inequality & the Changing Structure of Political Conflict" and it's a book-length 174 pages with references and charts.

Piketty says that both parties now appeal to elites in America, with high-education elites liking the left, while wealthy elites support the right—though he points out that this is changing in the era of Trump, with polling showing that wealthy suburbs are now a danger zone for Republicans.

It's dense stuff—not the sort of thing the "low education, low income voters" he writes about are likely to read:

"I argue that this structural evolution can contribute to explain rising inequality and the lack of democratic response to it, as well as the rise of “populism” (as low education, low income voters might feel abandoned). I also discuss the origins of this transformation (rise of globalization/migration cleavage, and/or educational expansion per se) as well as future prospects: “multiple-elite” stabilization; complete realignment of the party system along a “globalists” (high-education, high-income) vs “nativists” (low-education, low-income) cleavage; return to class-based redistributive

conflict (either from an internationalist or nativist perspective)."

But, if you parse it, his main argument, allowing for much complexity in the specifics of each race, is that "the cleavages structures in the 2016 presidential election" would have been different "had Sanders won the Democratic primaries against Clinton." (This is the only time Bernie is mentioned by name.)

Piketty's conclusion is that moving the Democratic party further to the left, at least when it comes to economics, would help it win. That's because it would help them bring back alienated working-class and uneducated voters who either don't vote now, or who are brought into the Republican fold through the party's nativism and social conservatism.

Piketty's analysis squares with what commentators from outlets like Salon, who employed the strident H.A. Goodman during the 2016 primary, have been preaching for awhile.

"Sanders remains the most popular politician in the United States, despite an ongoing bile-spitting campaign orchestrated by Democratic insiders," Salon crowed in a piece about Piketty.

The future, then, would have a Democratic Party where "lower class voters" of all stripes, including lower education and lower income voters, support them while upper and middle class people formed the Republican party.

Neither Piketty or the Salon writers considered the possibility that the class-based realignment they envision is happening, but that the Republicans have a lock on the lower classes. And that the future of the Democratic party is in the hands of people like Texas ex-Republican Nancy Sharp.

“Have you ever heard of a stupider and trashier man than the president of the United States?” she asked the New York Times in December.

“If you look at the patterns of where gains are being made and who is creating the foundation for those gains, it’s the same: An energized Democratic base is linking arms with disaffected suburban voters,” Chicago Mayor Rahm Emanuel told the Times. “The president’s conduct has basically given voters this permission slip to go against the Republicans.”