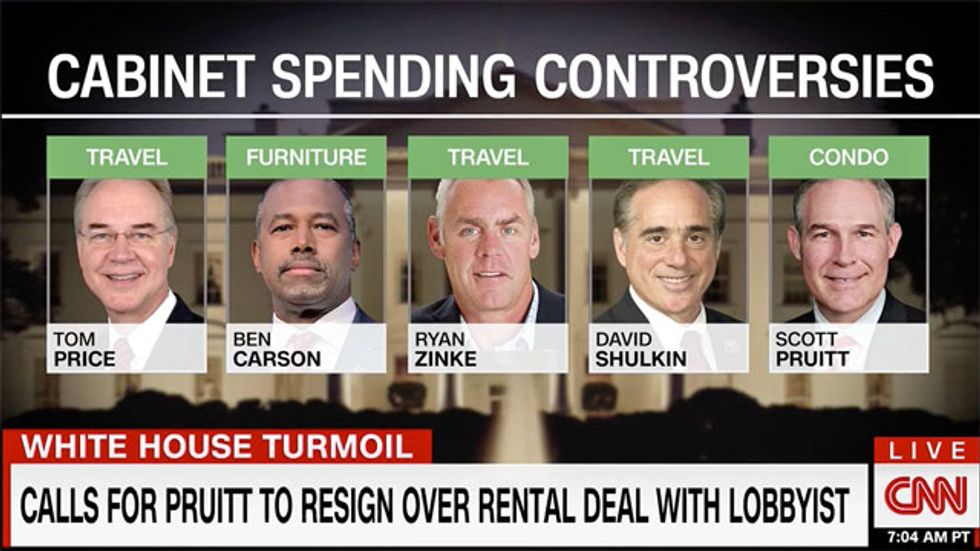 "I look at that, Ron, and I think what is striking about this may be the scope," Paul suggested.

"The magnitude of it is extraordinary" Brownstein agreed "and I think we are watching a real time confirmation of the saying that a fish rots from the head."

"The president has really set the tone, he set the tone when he broke with years of tradition by refusing to release his tax returns, they refused to release the logs of white house visitors, he hired his immediate family members, he spends an inordinate amount of time the at his own properties, he allows other institutions with interest in the political realm to hold events at his properties," Brownstein listed. "He has from the beginning set a tone that has encouraged this kind of disdain really for the traditional ethical boundaries on many different fronts."

The political analyst suggested Republicans would pay a price in the midterms for their lax oversight of the administration.

"It shows you that the decision by congressional Republicans not to impose more oversight ultimately bites them in the end, they are the ones going to be on the defending this behavior in November," Brownstein reminded. "If they were rigorous about surveilling the way the administration was behaving to begin with, you'd have less of these scandals coming forward."

"I just take this back to congressional Republicans, that I think brought this on themselves, sending the signal ... that they're not going to perform real oversight," he said later in the segment. "I think President Trump and the administration has basically viewed they can get away with almost anything."

"And ultimately, it is the people in Congress that are going to be on the front line if there is a backlash against this," Brownstein concluded. "By sending that signal, they have brought more trouble on themselves."