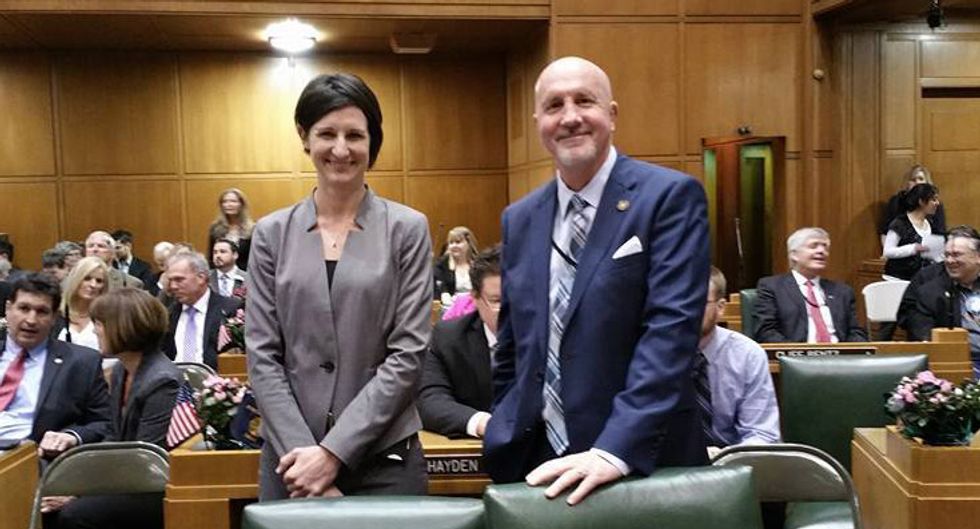 A Republican lawmaker in Oregon posted the personal contact information of three Portland clergymen who are leading the call to ban assault weapons and high capacity magazines in the state.

As the Oregonian reports, Rep. Bill Post (R-Keizer) wrote a post on Facebook encouraging gun rights supporters to “make a phone call or send a note” to three chief petitioners for what he described as “gun confiscation ballot measure.” Post also included the phone numbers and home addresses of their leaders.

“Should anyone want to make a phone call or send a note…. Feel free to right click and save the picture then share everywhere,” Post wrote.

Cahana told the Oregonian he received “quite a number of calls on my cell phone” from mostly polite gun rights advocates, adding the messages he received on Facebook and via email were “not so polite.”

The three clergymen are spearheading a gun proposal that would ban the sale of military-style weapons, including many semiautomatic shotguns, as well as large capacity magazines in Oregon in 2019. Possession would be a Class B felony, the Oregonian notes. The proposal would also stop the sale of magazines capable of holding more than 10 rounds of ammunition.

Asked why he felt the need to share the personal home addresses of the men, Post told the Oregonian “knowledge is power.” He also insisted he’s happy to see the measure on the ballot as “it will be the greatest red wave in Oregon's history.”