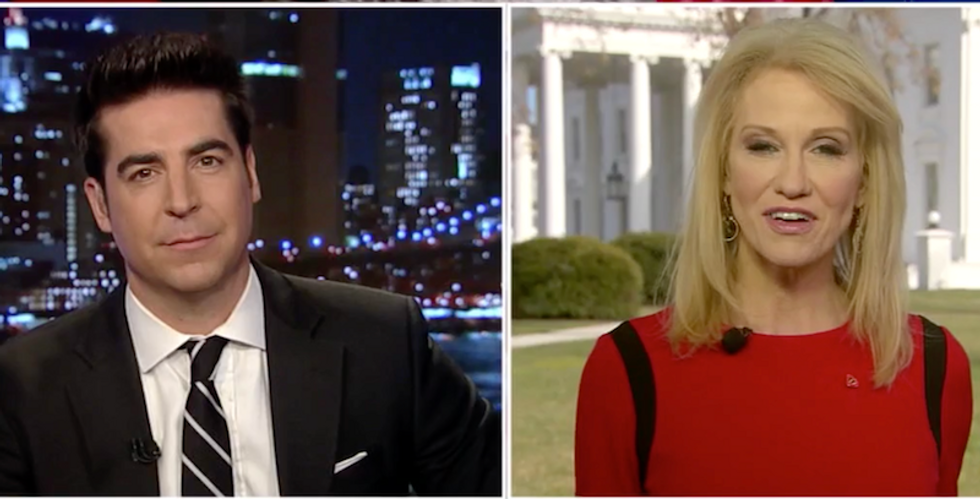 Donald Trump's most ardent supporters are not happy about his broken promise to build a wall.

Jesse Watters was downright morose in an interview with Kellyanne Conway. The Fox News host may be in a bad mood because he's being divorced by the wife he cheated on, but he decided to channel it all into complaints about the wall.

The idea of Mexico paying for the wall, as Trump promised voters in 2016, has of course been thrown out the door. But Watters wanted taxpayers to pay for it as part of a record spending package that will ballon the national debt.

"What happened to the wall funding?" he asked Conway.

"The wall funding has begun," she said. "It's not everything the president wanted."

"Not even close!" he whined.

"Jesse, this is a town that not so long ago was mocking the idea of a wall," she said.

Watters taunted Conway by suggesting that Trump, Wilbur Ross and betsy DeVos chip in to pay for the wall. She did not find it funny.

"They can all pony up some of their own cash to start some of the wall," he said.

"But, Kellyanne, you have to understand the disappointment after running on building the wall," he said. "I just don't think either party really wants it."