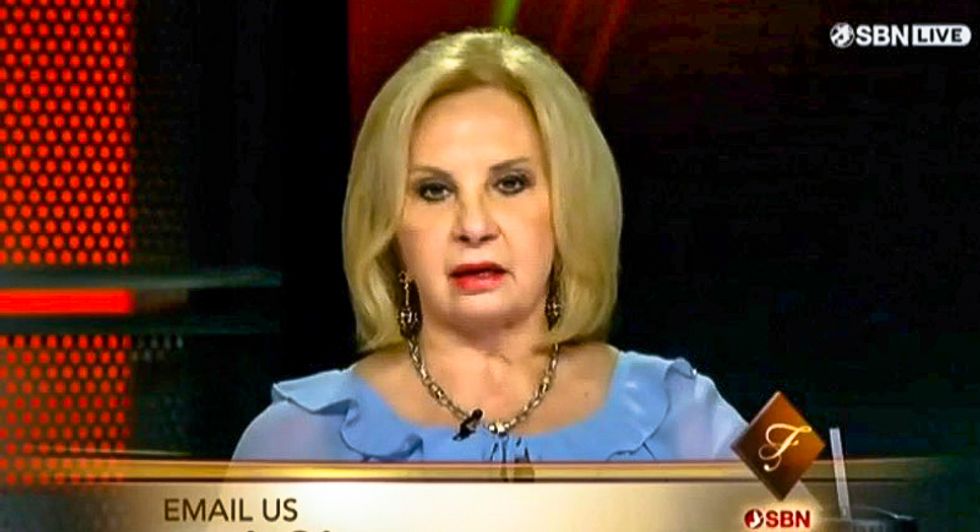 Televangelist Frances Swaggart, the wife of Jimmy Swaggart, on Monday suggested that the students who participated in the March for Our Lives over the weekend were like 'demonic' Nazis and Adolf Hitler.

During the Frances & Friends program, Swaggart reacted to an estimated 800,000 people who called for gun control by marching in Washington, D.C. over the weekend.

"People have got to address the fact that kids today are being put in school where there's no morals," the television evangelist announced. "Because we've taken God out of the school. And there's no resistance then to anything that Satan throws these kids' way."

"Today's gun control and confiscation rally was nothing new," she added, reading from a paper provided by a fellow panelist. "Nazis and leftists have been using children for decades in their attempts to take guns away from law-abiding citizens."

Swaggart then offered a "history lesson for young adults" about Nazism without mentioning that it was the Jews -- not gun owners in general -- who were violently persecuted by Hitler.

"Hitler's regime took away guns from the people in Germany and then he herded all of those who did not like it into box cars and shipped them to concentration camps where they were enslaved, beaten, raped and murdered," she said. "The victims didn't fire a shot in self defense because their guns had been taken away. That's a fact."

"And that's why evil people want to take the guns away from law-abiding citizens here in the United States of America," the host opined. "Everybody says, 'Let's get rid of the guns.' It's the worst decisions that could be ever made. Get rid of the guns. No! No! No! Put God back into the schools."

According to Swaggart, students who survived the mass shooting in Parkland, Florida are being used as "pawns" by liberal billionaires like George Soros.

"What happened with this last school and other schools that have shootings, this is going to happen," she insisted. "And it causes the people to get upset and it causes the disturbances and then you have what we have had over the weekend."

One panelist blamed the protest on demonic spirits.

"What they need to understand is that the real spirit behind it, it's Nazism and communism," he offered. "It's Satanic, it's demonic, it's anti-God."

Watch the video below from Frances & Friends.