Illinois contractor who bid for Trump's wall bombed a mosque and told neighbors he was building a 'n****r shredder': FBI 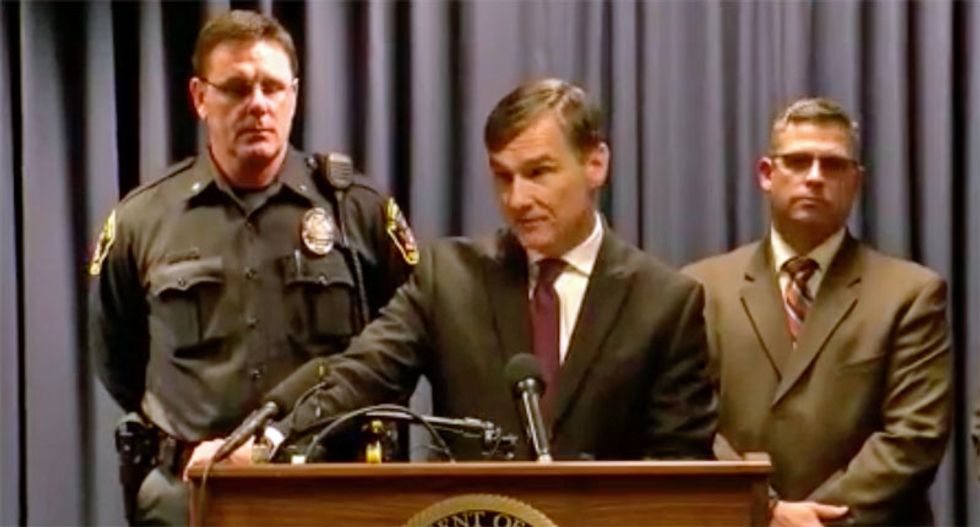 FBI and the US Attorney's Office press conference announcing three men were charged in connection to the August 2017 bombing at the Dar Al-Farooq Islamic Center in Bloomington, Minnesota

Federal authorities on Tuesday announced charges against three Illinois men suspected of the August bombing of an Islamic Center and attempted November bombing of a a women's health clinic.

Michael B. Hari, 47; Joe Morris, 22; Michael McWhorter, 29 of Clarence were arrested on gun charges. The Aug. 5 explosion at the Dar Al-Farooq Islamic Center in Bloomington, Minnesota resulted in no injuries, but five people were in the building at the time. The bomb targeting the Women’s Health Practice in Champaign on Nov. 7 was unsuccessfully detonated.

The attempted bombing of the women's health clinic, which provides abortion services, failed after a PVC pipe bomb thrown through a window failed did not detonate.

One Confidential Source cited in the complaint reported seeing "illegal firearms (fully automatic), M4s, video jammers and tannerite," which is an explosive mixture that is detonated when shot by a high-velocity bullet.

An emailed tip sent to the Bureau of Alcohol, Tobacco, Firearms and Explosives (ATF) claimed a suspect "has been buying a lot of weird chemicals."

"I thought he was making meth because he has science things like beakers too, but he said no, it is for a n****r schredder [sic]," the tip explained.

"I am afraid someone will get hurt if someone doesn't do something," the tip sender worried. "I also sent something about it to the newspaper, so if you just blow it off like you did that school shooter kid in Florida the press will know you got a tip, so you better check it out."

"Just saying you did screw up once and he has a rebel flag on a pole in front of his house," the tip continued.

One of the suspects, McWhorter, allegedly admitted to FBI Agent Smith that he was aware of the illegal firearms.

McWhorter explained that two of the AR-15 rifles had illegally been converted to "full auto" and that two were "way too damn short" under federal law.

The same suspect admitted that the gang committed a home invasion robbery of "a Hispanic drug dealer" in Indiana. The group were armed with automatic weapons and posed as law enforcement claiming to have a search warrant.

He also admitted to three robberies of Wal-Mart stores in Illinois.

In April of 2017, Hari told the Chicago Tribune he was starting a global security firm to build President Donald Trump's "big, beautiful wall."