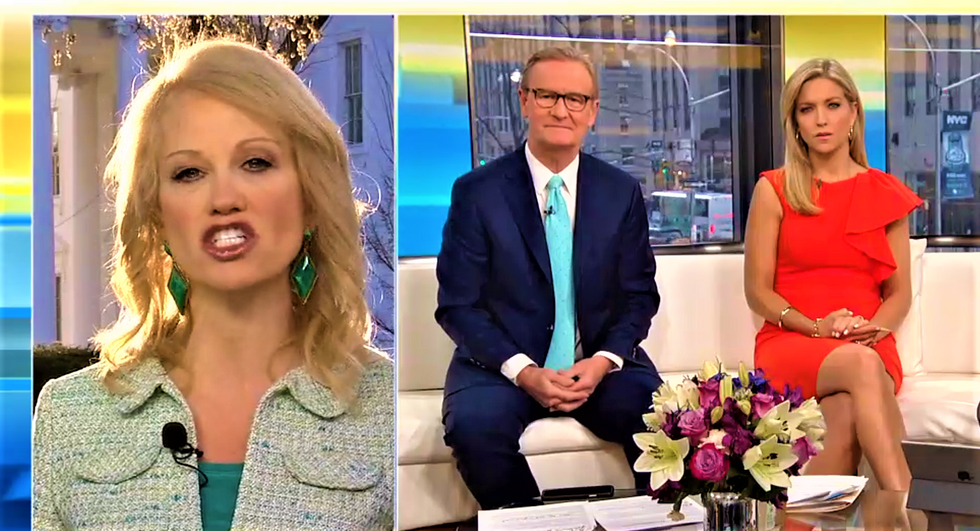 White House adviser Kellyanne Conway on Thursday took a shot at Fox News for reporting that President Donald Trump appears poised to conduct a major purge of his own White House staff.

When asked by "Fox & Friends" about a Fox News report claiming that Trump is planning to oust multiple officials -- including national security adviser H.R. McMaster, Secretary of Veterans Affairs David Shulkin, and chief of staff John Kelly -- Conway said that such stories were, on the whole, not very important.

"I don't have any personnel announcements," Conway began, before pivoting toward ripping the Fox News report. "I have to say I'm just fascinated about all the stories about palace intrigue and personnel, and a lack of stories about policy, it really is amazing. Thank God the president himself goes out across the country, like he did for two solid days this week, and takes his message directly to the people."

As an example of Trump taking his message directly to the American public, Conway pointed out that the president went to Missouri and "heard first-hand from people, including a tearful cafeteria worker saying, 'Thank you for my tax cut!'"

Host Steve Doocy seemed a bit taken aback by Conway's criticism and pointed out to her that, while Fox News does focus on policy issues, there has been a lot of turnover at the White House in recent weeks.

"This has been a big week for personnel changes," Doocy said. "That's why there's this speculation."

"The president has this right!" Conway insisted.