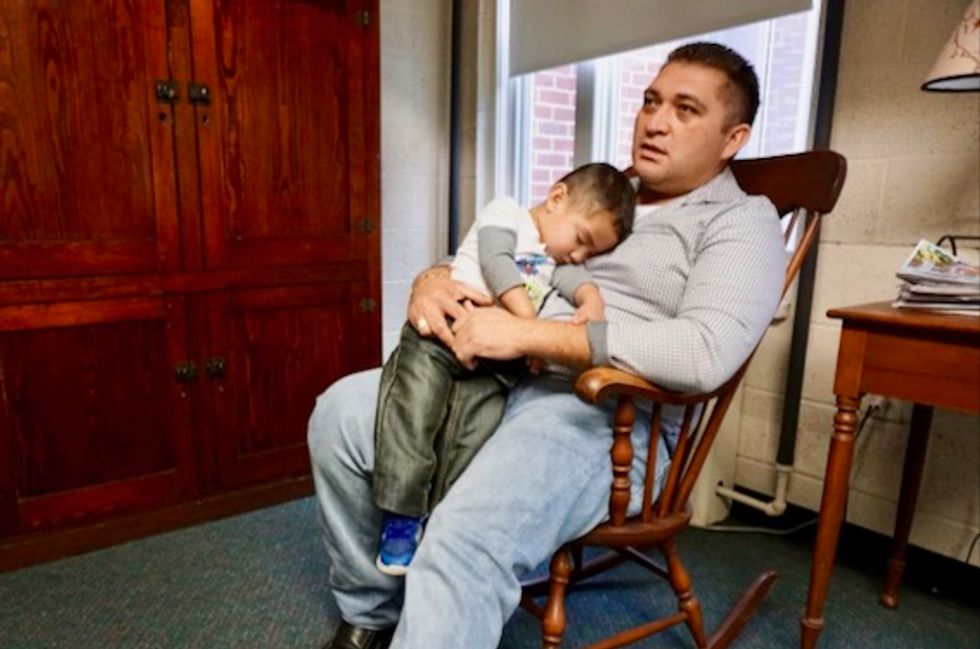 Business owner Oscar Canales holds his son, George, as he speaks during an interview at the Congregational United Church of Christ where he has taken refuge from deportation since January AFP / Issam AHMED

Business owner Oscar Canales has spent the past three months confined to a church basement in the US city of Greensboro, knowing he could face deportation to El Salvador the moment he steps outside.

Expulsion would mean tearing him apart from his wife and three American children, not to mention shuttering the thriving roofing company he founded which today employs six US citizens.

Canales first came to authorities' attention six years ago, when he was arrested for lacking papers following a minor accident at a traffic light.

But with no criminal record, past administrations chose to overlook the fact he crossed the border illegally in 2005 and issued him work permits that were renewed every year.

Now, he and millions of others are facing expulsion under tough new immigration guidelines instituted by President Donald Trump.

In response, some progressive Christian groups have boosted their efforts to protect vulnerable migrants by exploiting the protected "sanctuary" status of their places of worship while providing shelter and legal aid to would-be deportees.

Canales, who received his deportation order last December, has been living in the United Church of Christ since January 17.

He cannot imagine leaving America. "All my family is here, my wife, my kids," he says, adding he is fearful of being forced to face the violent gangs of a homeland he left long ago.

"They can take one kid and ask for money. If you don't give it today, they can do anything. They can kill people."

Canales is among more than 40 people currently known to be taking sanctuary in US churches, a figure that has skyrocketed since Trump's election in 2016, when there were just five, according to the Reverend Noel Andersen of the Church World Service which tracks the movement.

"Under the Obama era there was a lot more prosecutorial discretion" especially for those who have committed low-level offenses such as traffic violations, or had community or family ties like Canales, he said.

"Essentially Trump comes in and gets rid of the priority guidelines, and anyone who is undocumented is a priority" -- a group that is estimated to number some 11 million.

In Trump's first year, US Immigration and Customs Enforcement arrested 109,000 criminals and 46,000 people without criminal records -- a 171 percent increase in the number of non-criminal arrests over 2016.

The goals of the sanctuary movement are to prevent the break-up of families, win legal reprieve for as many people as they can, and effect narrative change.

Their philosophy is at odds with the anti-immigration tide that has swept the country's political right, particularly in many southern states which are also a bastion of right-leaning Evangelicals.

But for the Reverend Julie Peeples, the Greensboro pastor, her duty to provide shelter to those in need couldn't be more clear.

"Jesus teaches us to love our neighbor as ourselves, that was the most important command of all," said the soft spoken preacher who has led her congregation since 1991.

"We are convinced that Jesus wouldn't call anyone an alien, for starters, that we are all human beings, that we are all children of God -- I believe personally that God crosses all our borders and has no interest in or respect for the borders that we create."

Canales is the second person to benefit from sanctuary at the Greensboro congregation -- the first was single mother Minerva Cisneros Garcia, 42, who came from Mexico's Guerrero state in 2000 with her first son, who became blind as a baby as a result of cancer.

Like Canales, Minerva was a law abiding citizen who was caught up in an immigrant raid in 2009, after which she was granted stays at her annual hearings.

But last spring she received a letter in her mailbox informing her that her time in the US was up, and she would have to leave her three sons behind.

She then sought help from the church, which provided her sanctuary from June until October, when a federal judge became aware of her case and vacated the original order.

"It feels like a golden cage," she said of her time spent at the church. "That place used to feel safe, I used to feel like a small bird inside a cage, because they used to provide me with everything, food, water, shower, everything."

"I used to feel sometimes very sad, but very happy too because I knew I had support from people."

Minerva's case is one of five successes Anderson has tracked so far, with others as far and wide as Connecticut, Arizona and Colorado.

Despite her victory, immigration agents gave her an ankle monitor to wear at all times, a decision she says leaves her feeling under threat.

"I think they want to show they have the power, I really don't understand why," she said from her modest home as her two younger sons played after returning from school.

Doug Long, another pastor at an affiliated church in the nearby town of Raleigh, says his church is prepared to deal with greater legal consequences, and understands that the authorities' decision to not enter sanctuary churches is based on a non-binding guideline.

His congregation took a vote before deciding to host 39-year-old father-of-four Eliseo Jiminez, in sanctuary since October, and now members take turns to stay overnight in the church to record video in case federal agents enter the premises.

"The legal aspects of this all this are a grey area," he admitted.