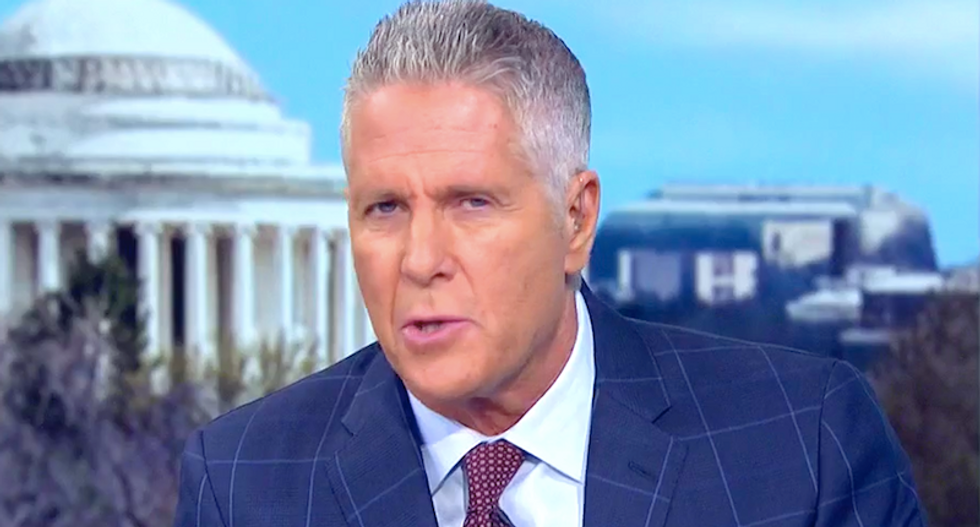 MSNBC contributor Donny Deutsch dreads what President Donald Trump might do now that Hope Hicks, his trusted aide and security blanket, has left the White House.

The president has apparently decided to launch a trade war through aluminum and steel tariffs as his most trusted advisers -- Hicks, son-in-law Jared Kushner and daughter Ivanka Trump -- have either decided to leave or been hit with a series of damaging blows.

Friday morning, the president tweeted a misspelled attack against actor Alex Baldwin and then boasted that trade wars are both "good, and easy to win" -- and the "Morning Joe" contributor winced at what might come next.

"This week if you were concerned about Donald Trump being our president, you really felt the noose tighten with Hope Hicks leaving and the Kushner story and the new conspiracy leading directly to Trump from (special counsel) Robert Mueller's point of view," Deutsch said. "You really feel it, and the bad news, though, if you're somebody that's concerned about Trump, is you're really starting to see the beginning of a cornered Donald Trump, and what is he capable of doing at the expense of the world or the United States or the consumer to save himself?"

Deutsch, who has known Trump for years, worries that the president's enthusiasm for a trade war might signal his eagerness to provoke nuclear war.

"I'm concerned that this is a harbinger of things to come, in what will he do with North Korea at the expense of the rest of the world?" Deutsch said. "What will he do in any scenario to do this kind of shiny toy thing?"

He said the loss of Hicks, the White House communications director who had been at Trump's side since the beginning of his long-shot presidential campaign, could prove devastating to an increasingly unhinged presidency.

"Hope Hicks leaving is very scary," he said. "I mean, if you know people that have run companies or people in organizations, there's always one or two people in there that run a company that you go to that is somehow the sanity check or somehow the calmer. That's not there anymore, and as the Mueller noose continue tighten and the Kushner noose continues to tighten, this is a man with his hand at the controls. Yes, a trade war is very concerning, (but) what are the other things he's capable of doing at the expense of all of us to save or protect or deflect when it comes to his own hide?"