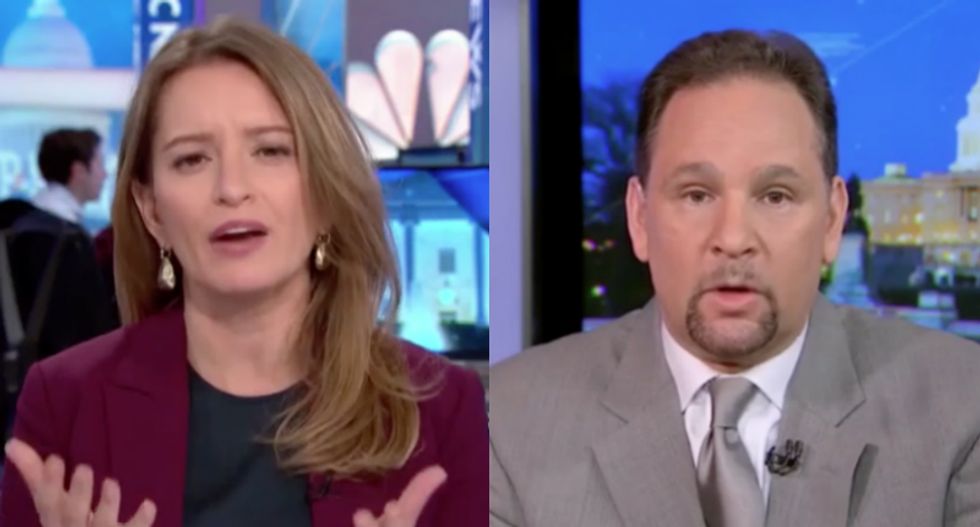 After a journalist with the Christian Broadcasting Network attempted to defend President Donald Trump's track record with evangelicals, MSNBC's Katy Tur raised her voice when listing off the president's many moral failings.

"The evangelicals will start to walk away — I'm not just talking about vulgarity, I'm talking about immorality of many other kinds — when he is president of the United States," Christian Broadcasting Network's David Brody said during a Monday afternoon airing of Meet the Press.

When it comes to the president's alleged affair with adult star Stormy Daniels in 2006 and 2007, evangelicals will give him "grace" for his past misdeeds, the CBN White House correspondent said.

"Folks might scoff at that but it is grace," he continued, "but they won't give him grace if it's happening in 2018, that's for sure."

"Are you sure about that?" Tur asked Brody. "Do you think suddenly now Donald Trump going on stage and calling someone an S.O.B. or calling Elizabeth Warren 'Pochahontas' or saying that a congresswoman who's African American has a low I.Q., now, suddenly, that's gonna be a line that he can't cross for evangelicals?"

"There's no upside for him," Brody said before elaborating that Trump has delivered on evangelical policies such as moving the Israeli embassy to Jerusalem and successfully nominating Neil Gorsuch to the Supreme Court as a way to appeal to his fundamentalist base.

Undeterred, Tur asked Brody why Trump was even given a "pass" from evangelical voters in the first place despite him failing to "embody their issues." The CBN correspondent began to discuss Hillary Clinton's support for so-called "partial-birth abortion" when the host cut him off.

"'I'm not going to vote for Hillary Clinton because of her support on abortion but I can vote for Donald Trump who's had three divorces, who says vulgar things, who has had numerous affairs, who has bragged about grabbing women by the genitals,'" Tur said, mocking evangelicals who supported the president in spite of the image he presented on the campaign trail. "Hillary Clinton is the more morally hard-to-swallow candidate than Donald Trump?"