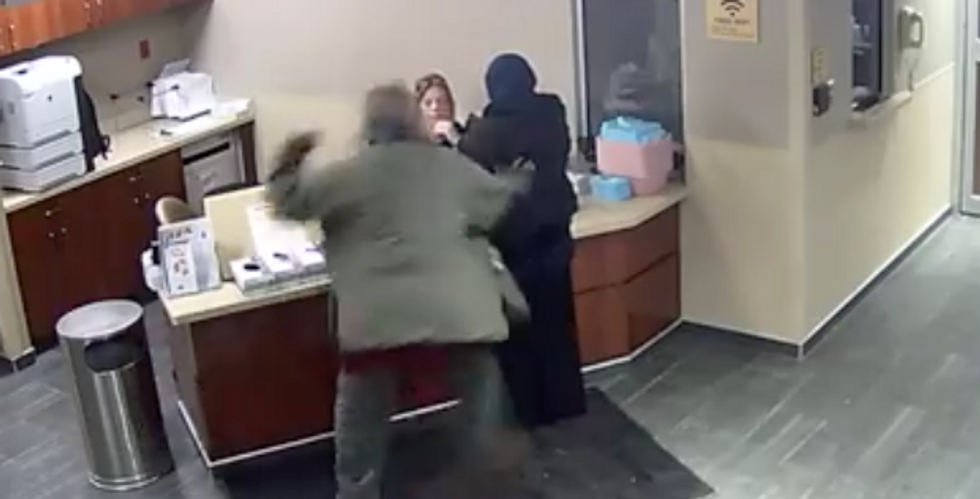 A recently-discharged patient attacks a Muslim woman in an ER in Dearborn, Michigan. Image via screengrab.

Security camera footage from a hospital emergency room in Dearborn, Michigan shows a man attacking and beating a 19-year-old Muslim woman as she checks in.

Detroit's WDIV 4 reported Friday that attacker John Deliz, a recently-discharged patient, came up to the 19-year-old woman wearing hijab while she was checking in to see if she had broken her jaw when falling on ice earlier in the day on February 20.

Deliz had been wandering the halls of the hospital and asking people for cigarettes when security guards told him to wait in the ER waiting room until he could get a ride to leave. Shortly after being the subject of that demand, he attacked the teen, whose name has not yet been released.

"She never saw it coming," Majed Moughni, the young woman's attorney, told WDIV. He also announced that his client is suing the Beaumont Dearborn hospital for emotional damages, and said they are investigating whether the attack was based on her religion.

Moughni himself had been the subject of Islamophobic threats in the region that boasts a large Muslim and Arab population after suing Little Ceasars pizza chain for making fraudulent claims about halal pizzas that he said did not actually adhere to Muslim dietary restrictions. After the lawsuits began gaining media attention, the attorney said he and his daughter began receiving death threats on social media, and eventually withdraw the complaints.

You can watch the graphic video of the teen's attack below, via Facebook.