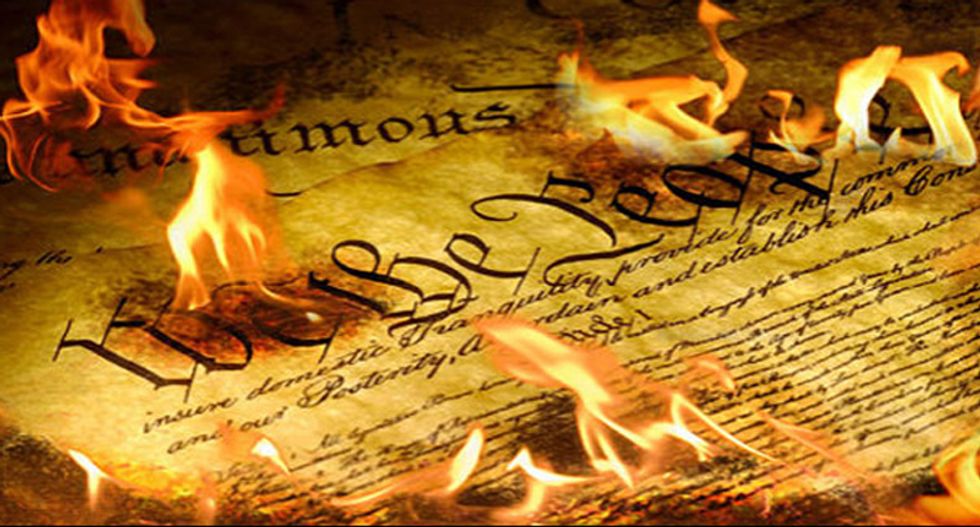 American corporate power has never been stronger. It’s not just the Trump administration’s crusade to gut government regulation; the federal courts have increasingly been granting corporations liberty rights once held only by individuals. In his new book, We The Corporations: How American Businesses Won Their Civil Rights, UCLA constitutional law professor Adam Winkler traces the history of how corporate America has successfully waged a civil rights movement on its own behalf since the country’s earliest decades. AlterNet’s Steven Rosenfeld spoke to Winkler.

Steven Rosenfeld: Tell us why you are so interested in informing people about how corporations got their legal rights.

Adam Winkler: In recent years, the Supreme Court has ruled that corporations have freedom of speech, in Citizens United, and religious liberty, in the Hobby Lobby case. I sought to find out: How did corporations win our most fundamental rights? In school, we learn about civil rights, and women’s rights, even state’s rights, but never corporate rights. I was shocked to discover when I looked into it that, like women and minorities, corporations have fought since America’s earliest days to win equal rights under the Constitution. And they use those rights to fight off business regulations designed to protect the public.

SR: Yes, we have certainly seen that today. But did it start that way? Or did it turn into that?

AW: Corporations have always used constitutional rights to strike down regulation. Corporations seek rights to fight back against business regulation. Even when laws are passed to protect consumers and investors and the public at large, rights can be used in court to challenge those laws. It’s not just a new thing. The first Supreme Court case on the rights of corporations was decided in 1809, a half-century before the first Supreme Court case on the rights of African Americans. Even back then, it was a powerful corporation, the Bank of the United States, that was seeking to overturn a Georgia law that imposed a tax on the bank. So from the get-go, corporations were fighting off regulation.

SR: We hear many stories about how corporations became synonymous with people under the law. Can you shed some light on how that happened? I have a sense it wasn’t a single Supreme Court case. What actually happened?

AW: Right. For all the controversy of [2012 GOP presidential nominee] Mitt Romney saying "Corporations are people," corporate personhood is actually a very longstanding principle of basic business law. And what it means is the corporation has its own independent identity in the eyes of the law—totally separate and apart from the stockholders, the employees and the creditors. That’s why if you slip and fall at Starbucks, you have to sue the company; you can’t sue the individual shareholders. Shareholders have limited liability because they are separate legal persons, in the eyes of the law from the corporation. That idea is a very longstanding one. If you go back to Blackstone and his [legal] commentaries, [written in] 1757, he described corporations as artificial persons designed to carry on the rights of people, when the people themselves may not be able to do so.

SR: The reason I ask this is because we hear a lot of political slogans, like 'Corporations are not people,' which would imply that there’s a simple switch that can be flipped somehow in the legal system to turn off those rights. What’s wrong with that?

SR: Today many people are saying that American corporations have become so big that they are larger than states—they’re transnational. I have heard constitutional lawyers at Stanford say that the rules of the internet, which are the private user agreements, would never be found constitutional under the First Amendment’s freedom of speech. But they’re the rules. They transcend national boundaries. It’s not really clear who might rein them in or how. It all points to the question, have corporations become too big? Do they have too much power? Do they have more rights than individuals? What’s your sense?

AW: Those are great points. And indeed, one of the things that my book does show is that corporations have been powerful not just in legislatures but also in the courts. We think of corporate power after Citizens United, primarily in terms of lobbying or campaign expenditures, basically how they influence legislation. And when we see something like the Trump tax bill, you really see the influence of corporations exerting their political power on lawmakers.

But there’s also been a determined effort by corporations to win power in the courts. And not just win favorable rulings, but actually win basic constitutional rights that they can use to strike down legislation. They have been very successful in doing so. Do corporations have more rights [than individuals]? In some ways, yes, because to the extent that you need money to defend your rights—to hire the best lawyers, to argue your cases, to take you cases to the Supreme Court in the first place—to the extent the system depends on money to do that, corporations are uniquely situated with their massive resources to take advantage of the courts.

SR: What are citizens supposed to do then? We have this notion in a democracy that citizens matter. And citizens have rights. And the Bill of Rights was created for individual citizens. Yet it seems the rights of citizens are shrinking.

AW: It does seem that way. It does seem that corporations are winning more and more the rights of citizens, even as we feel that individual citizens are losing some of their rights. For instance, while I trace the history of corporations seeking constitutional rights all the way back to early America, that first case in the early 1800s, it goes throughout American history. Corporations have consistently fought for constitutional rights. But traditionally, the Supreme Court has limited corporations to property rights. Yeah, they have basic rights to protect their property, but not rights to protect liberty. Rights associated with political freedom and personal conscience were off-limits for corporations. The Supreme Court has stoked controversy in recent years by extending more and more liberty rights.

SR: Yes, if you think about it, the way the Occupy protests were shut down in New York City was because it was on a private park. There were other decisions in the federal courts, the labeling on tobacco, for example, where the speech rights of commercial entities was held in higher esteem than the public interest health rights. Am I presenting that in a distorted way?

AW: I don’t think so. Part of what you are speaking to is how corporations have successfully taken over the Constitution in so many ways. We think about the First Amendment, for instance. It was enlivened by the Supreme Court. The court really began to breathe judicial protection of free speech in the early 20th century, in response to the silencing of dissenters like socialists and communists and immigrant radicals. The idea was the First Amendment was going to protect the little guy from being abused by the big guys. But today, 50 percent of all First Amendment cases are brought on behalf of corporations and trade associations that represent corporations. And so the First Amendment has really become a tool for the most powerful entities to strike down laws, like you say, regulating tobacco, or regulating disclosure on the use of conflict minerals, or growth hormones in dairy products. We’re seeing very common use by big businesses of our cherished rights that were designed for outsiders.

SR: What do you hope readers will take away from this book? The narrative is discouraging. The pendulum is swinging away from individuals. Are you hoping people will become aware of this history and seek a rebalancing?

AW: I’ll leave it for others to decide what to do with the information. I’m an academic. I thought there was a very interesting history and phenomenon here that was filled with remarkable and fascinating stories about a hidden civil rights movement in America. It didn’t happen by corporations marching on the street. That doesn’t happen obviously. But it has been in the courts and in the Supreme Court.

I think if you want to solve any problem, you need to understand how you got here and what were the causes and consequences of what’s happened. Hopefully, I can participate and shape that debate a little bit, but I don’t have any big broad goals that I want people to act in a particular way. The story I tell will complicate the views of partisans on both sides. It turns out I find that it was actually conservative courts that drew the initial boundaries on the rights of corporations. And it was often liberals that fought for extending rights to corporations, or fought for First Amendment theories that ended up benefiting corporations. So it’s a more complicated story when you look back at history than maybe any one side in the debate would like to admit.

SR: This is like what you found in Gunfight, your book about the history of the Second Amendment. It’s a complicated history that most people don’t know.

AW: Yeah, there are a lot of overlaps with my book Gunfight, which was also a deep dive into a hidden secret history, to show that things are often more complicated than we are led to believe. And also, there are fascinating and important lessons to be learned from this. One of the lessons I think that we can learn is that corporations do need some rights. They need rights for their property, so that the government doesn’t take their property without just compensation. They need some basic rights in due process. We wouldn’t want the government to say Apple is guilty of a crime for not opening up a terrorist’s iPhone, without Apple having the right of due process of law.

At the same time, the [Supreme] Court has erred in recent years by extending these fundamental liberty rights, like religious freedom and political speech to business corporations. Those are rights that depend on personal conscience and on personal autonomy. Corporations are artificial creatures that are mandated by law to pursue certain kinds of interests, generally thought to be maximizing the shareholders' value. They don’t have the autonomy that some of those basic liberty rights depend on.