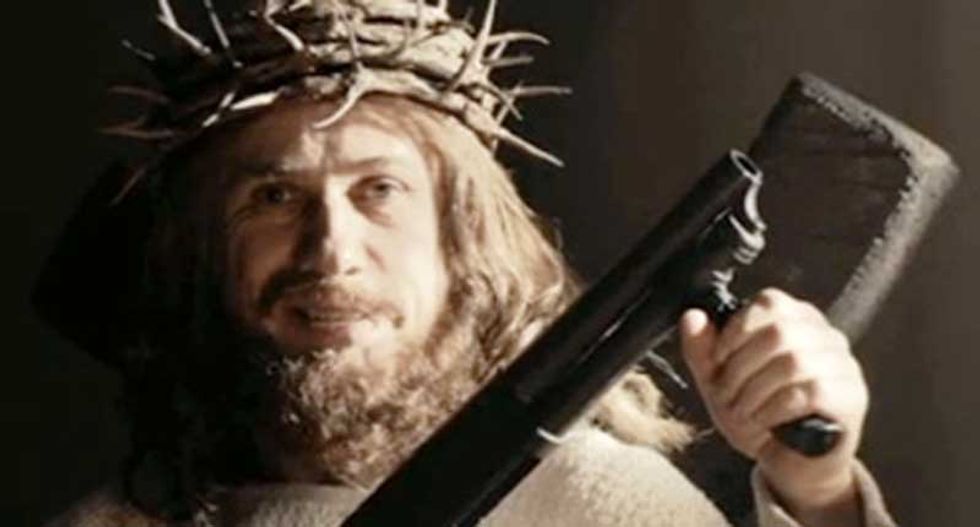 Garry Wills was being only slightly ironic when he wrote (in the wake of the ghastly Pulse nightclub massacre in Orlando) that it is “theologically inconceivable” to implement real gun control in the United States:

God gave us guns to show us who we are. Giving up the gun would be surrender to evil, taking us abruptly into eschatological time…

The Gun is patriotic.

The Gun is America.

The Gun is God.

The lobbying efforts of the NRA and advertising by US gun manufacturers are the designated culprits in most arguments for gun regulations and bans of some weapons, but the NRA and gun manufacturers’ success is due to a larger ideological hegemony that they did not create, but rather have exploited.

It’s Dunbar-Ortiz’s mission to illustrate how this hegemony came to prevail. Those who read Loaded will be able to see that the “irrationality” of things like open-carry laws and widespread resistance to gun safety measures become entirely comprehensible when viewed within the overall trajectory of a religiously-infused American Exceptionalism.

Dunbar-Ortiz, whose 2014 Indigenous Peoples’ History of the United States won wide acclaim, appropriately brings her vast knowledge of white Europeans’ genocidal treatment of Native Americans to bear in this new volume. But she adds new layers of insight by treating the Europeans’ “savage wars” against the indigenes in tandem with the whites’ overwhelming need to control Black bodies in building a hugely powerful economy based almost entirely, before 1850, on the theft of both land and human beings.

She reminds her readers that the United States was the first nation-state founded on the principles of raw capitalism, with land viewed as a commodity and with human beings viewed as chattels. Nation building on this model obviously requires a great deal of lethal violence, and there was never the slightest hesitation among the colonizing whites to use such violence.

This is not the kind of history that’s taught in our high schools and colleges, but it ought to be. Some of the key data surfaced by Dunbar-Ortiz that every one of us ought to know:​

Confining herself to just ten tight chapters, Dunbar-Ortiz cannot do full justice to the religious dimensions of the gun culture, but what s​he does give her readers is fully on point. She works with three key concepts: divine election, covenant, and blood sacrifice (or what fellow historian Richard Slotkin calls “regeneration through violence“).

She is particularly good on the concept of an unbreakable covenant, whereby God’s elect are authorized to take the land and kill or enslave its inhabitants in fulfillment of the divine purpose. The notion of a special election that continues regardless of any sins or crimes committed is of course rooted in John Calvin’s theology, and Dunbar-Ortiz notes that some of the most aggressive expropriators/exterminators in our bloodstained history—those most eager of all to push over the mountains—were of Scots-Irish extraction and thus Calvinist in their religious orientation.

Moreover, the modern capitalist ideology—the semi-sacred law of contract—that complements and reinforces the American Way of expropriation and slaughter (i.e., the true “American exceptionalism”) was likewise bequeathed to us by a couple of brilliant Scots—John Locke and Adam Smith—whose intellectual formation included distinct inflections of Calvinist thought (a contract and a covenant being more or less the same thing).

A different book would be required to tease out all of these theological dimensions, but Dunbar-Ortiz supplies enough provocative bits to give us pause and set us thinking.

Her most chilling takeaway: from the time the first Europeans arrived to commence their campaign of plunder and terror, “real” Americans always earn their status through their willingness to engage in blood sacrifice. Sometimes it’s their own blood, but mainly it’s the blood of others.