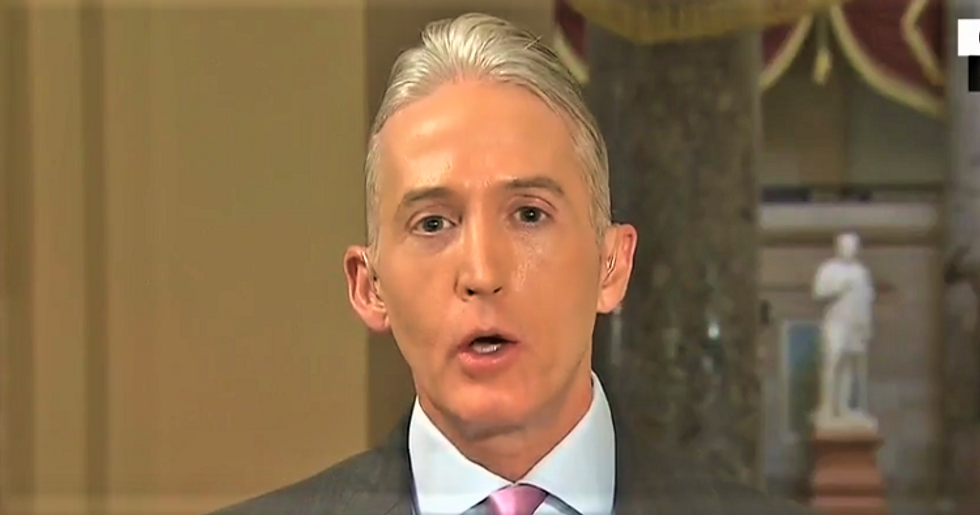 House Oversight Committee Chairman Trey Gowdy (R-SC) said Tuesday that he saw evidence of Russia's distaste for Hillary Clinton in 2016. In doing so, Gowdy broke with his fellow Republicans on the chamber's intelligence committee, who issued a draft report effectively closing their Russia investigation with the conclusion that the Kremlin did not have a preference for Donald Trump.

CNBC reported Tuesday that Gowdy's statement came after House Intelligence Committee Chairman Devin Nunes (R-CA) thanked the South Carolina congressman in the report on the closure of the interview portion of the Russia probe.

In his statement, Gowdy said that it's "clear Russia had disdain for Secretary Clinton and was motivated in whole or in part by a desire to harm her candidacy or undermine her Presidency had she prevailed."

After issuing his press release, a source familiar with the Oversight chairman's thinking clarified his statement, saying that "in a two person race, wishing one candidate will lose is the same as hoping the other candidate prevails."

UPDATE: A source familiar with Gowdy's thinking tells me he DISAGREES with the suggestion that the Russia didn't ha… https://t.co/DN1XeGS50p
— Kyle Cheney (@Kyle Cheney) 1520976920.0

On Tuesday afternoon, Rep. Mike Conaway (R-TX), the House Intelligence Committee member who has ostensibly led the panel's Russia probe since Nunes claimed to recuse himself, also acknowledged that he'd seen evidence of the Kremlin's desire to "hurt" Clinton.