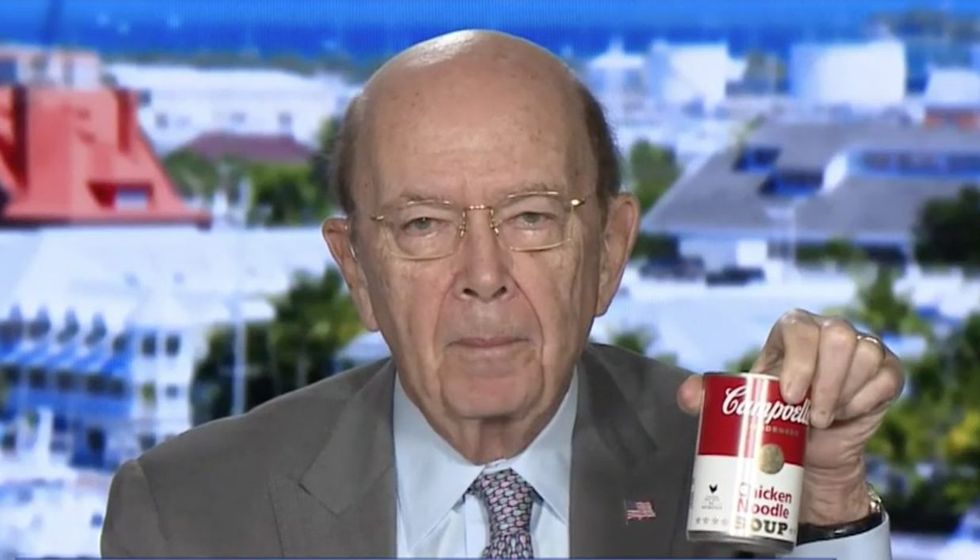 Trump Commerce Secretary Wilbur Ross on Friday went on CNBC to defend President Donald Trump's newly announced plans to slap tariffs on foreign steel and aluminum -- and he drew widespread ridicule for his boast about buying a can of Campbell's Soup.

During a CNBC interview, Ross pulled out a can of soup that he said he had just picked up from a local 7/11. He noted that the can only cost $1.99, and he said that the additional cost per can that would result from the president's new aluminum tariff would be minuscule for most consumers.

"If that goes up by 25 percent, that's about six-tenths of one cent," Ross said while holding up the can. "Who in the world is going to be too bothered by six -enths of a cent?"

The bizarre image of Ross brandishing a soup can to explain the president's economic policies drew hackles from across the internet -- check out the best reactions below.

Wilbur Ross expecting us to believe he walked into a store and bought this can of soup is the *absolute limit* of t… https://t.co/iEdnt6CPDy
— Dr. Alexis Henshaw (@Dr. Alexis Henshaw)1520011446.0

Wilbur Ross is the Nick Foles of goofy cabinet secretaries. When the starters go down he comes up huge in a big sit… https://t.co/rS8Nr0P39z
— The Mall Krampus (@The Mall Krampus)1520011005.0