Trey Gowdy blisters Trump's attorney for making him look guilty: 'If you have an innocent client then act like it' 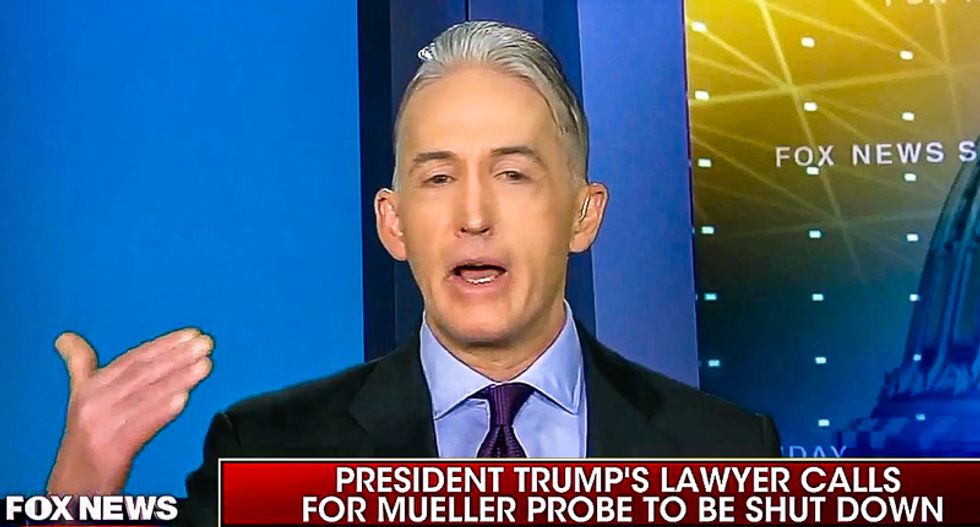 In a statement over the weekend, Trump attorney John Dowd said that Mueller should end his investigation.

“I pray that Acting Attorney General Rosenstein will follow the brilliant and courageous example of the FBI Office of Professional Responsibility and Attorney General Jeff Sessions and bring an end to alleged Russia Collusion investigation manufactured by McCabe’s boss James Comey based upon a fraudulent and corrupt Dossier,” Dowd opined.

"The president's attorney frankly does him a disservice when he says that and when he frames the investigation that way," Gowdy explained. "If you look at the jurisdiction for Robert Mueller -- first and foremost, what did Russia do to this country in 2016. That is supremely important and it has nothing to do with collusion."

"If you have an innocent client, Mr. Dowd, act like," the South Carolina Republican added.

Gowdy, who is chairman of the House Oversight Committee, also said that there was little he could do if Trump decides to fire Mueller or Attorney General Jeff Sessions.

"I hope that's not what's happening," Gowdy remarked. "I'm not sure the House can do a lot. We don't have advise and consent. I think the president is going to have a really difficult time nominating and having approved another attorney general. It's going to be a very, very, long, bad 2018."