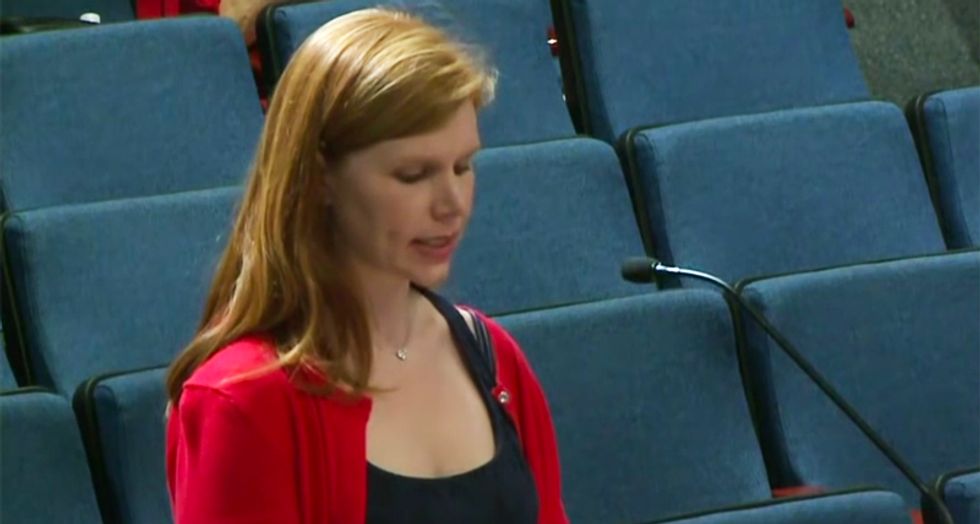 A Trump administration official during closed-door talks with representatives of other nations at the UN said the United States is "a pro-life nation," and advocated for language that would enable the promotion of "abstinence-only" sex education. The Independent's Mythili Sampathkumar first reported the story, noting that U.S. law and the majority of the public support abortion rights.

"Bethany Kozma, a senior adviser in the office of Gender Equality and Women’s Empowerment for US Agency for International Development (USAID), made the statement while countries negotiated the final document of the ongoing, annual women’s rights conference," The Independent reports.

Kozma, a former blogger for the right wing think tank Heritage Foundation, was appointed by President Trump to USAID, an independent agency that works closely with the State Dept. and the National Security Council. It has about 4000 employees and an annual budget of $27 billion.

Buzzfeed calls Kozma an "anti-transgender activist" who "held positions in the White House and Department of Homeland Security under President George W. Bush, according to her LinkedIn profile, before dedicating herself full-time to raising her children."

"In 2016, she launched a campaign to oppose the Obama administration's guidance to public schools that said transgender students have the right to use facilities matching their gender identity; the guidance was withdrawn by the Trump administration in February."

GLAAD notes that Kozma once testified at "her local school board that there is a direct link between sexual predators and trans access to facilities. 'Imagine how predators will be emboldened and enabled, endangering other young girls if they are allowed to enter girls facilities and protected under your current policy,'" she said.

Here's Kozma in 2016 addressing the Fairfax County Public Schools, and claiming there is a link between transgender women and sexual predators.

There is a petition urging the Trump administration to remove her from the official U.S. delegation to the United Nations Commission on the Status of Women (CSW).