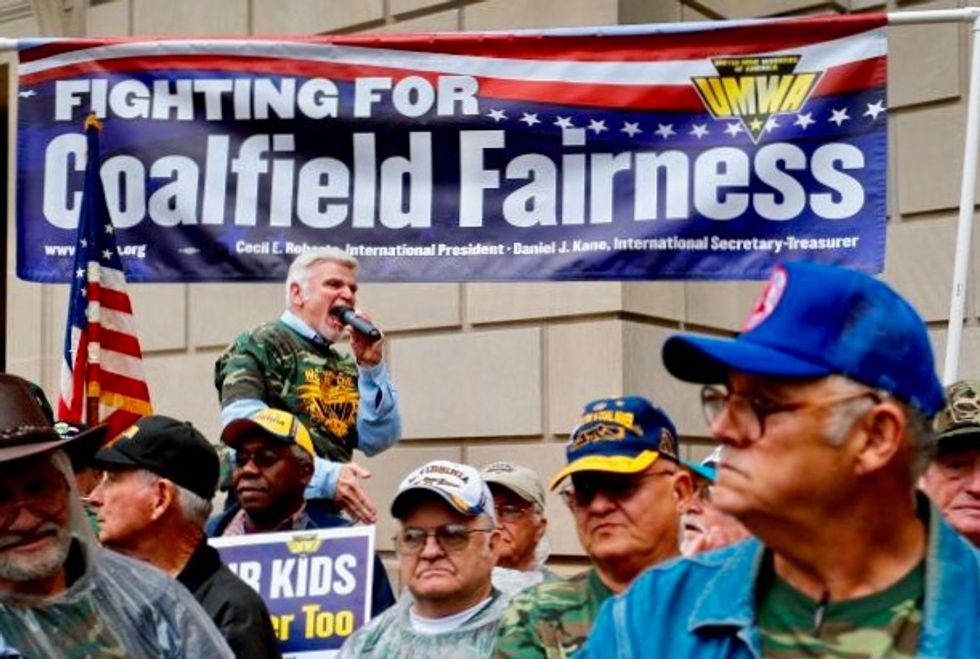 The main U.S. coal miners’ union is set to endorse two Democrats running for Congress in West Virginia, two sources familiar with the matter said on Thursday - a boost for Democrats trying to win over a constituency that voted heavily for Republican Donald Trump in 2016.

The United Mine Workers of America on Friday will endorse Richard Ojeda for U.S. Representative in the state’s third district, as well as incumbent Senator Joe Manchin, a Democrat and former West Virginia governor, the sources said. They asked not to be named as they were discussing a confidential matter.

The union sees Ojeda and Manchin as supportive of major issues facing coal miners, particularly efforts to preserve their pensions, the sources said. In addition, neither candidate has fully embraced the Democratic Party’s push for climate regulation, a sticking point for miners.

Trump’s White House win in 2016 was due in part to his promise to revive the ailing coal industry, which has lost more than 40 percent of its work force in less than a decade, by rolling back environmental regulation. While his administration has chipped away at regulations, the coal sector remains in the doldrums, under pressure from cheaper and cleaner natural gas, more than a year into Trump’s presidency.

Republican control of Congress will be at stake in midterm elections in November, when all 435 seats in the U.S. House of Representatives and 34 of the 100 Senate seats will be up for grabs.

The endorsements in West Virginia this week follow the union’s support for Conor Lamb in a special election for a House seat in Pennsylvania that he won earlier this month.

Political observers have said that upset could be a bellwether for future races in areas that had supported Trump. The UMWA had organized a rally, door-to-door canvassing, and phone bank operations for Lamb.

UMWA President Cecil Roberts told Reuters that Lamb - a former Marine who wore work boots while talking with voters - won because he focused on protecting miners’ pensions, which are at risk of insolvency due to bankruptcies and mine closures.

“That’s how Conor Lamb was able to swing those voters to his side,” Roberts said.

Roberts said Ojeda, a tough-talking former Army paratrooper who comes from a long line of coal miners, reminded him of Lamb.

The UMWA has endorsed about three more Republicans than Democrats in House races so far in this cycle. But the tally will likely become evenly split between the two parties in the coming months as the union looks to races in Ohio, Colorado, and Arizona, said one of the sources.

It is unclear how much the endorsements will help the candidates, but miners are seen as an influential political constituency, particularly in Appalachia - the epicenter of the U.S. coal industry.

Ojeda, currently a state senator in West Virginia who is seen as a favorite in a Democratic primary to pick the party’s candidate on May 8, faces a tough election battle in his heavily Republican southern West Virginia district.

Trump won the district by 49 percentage points against his Democratic rival Hillary Clinton in 2016, and Ojeda himself voted for Trump. Ojeda did not comment about the coming endorsement, but said in an brief interview, “I’m going to fist fight for workers who have been neglected.”

In 2016, the UMWA endorsed a Republican in Ojeda’s district, Evan Jenkins, who is retiring to run for the U.S. Senate.

Manchin, meanwhile, has long been the Democratic Party’s strongest supporter of coal interests, advocating more production and backing controversial subsidy proposals. But several Republicans are lining up against him in the midterm elections.

Among them is Don Blankenship, a former coal company executive who served a year-long prison sentence for conspiring to violate safety standards at the Upper Big Branch mine - where 29 miners died in 2010.

Manchin’s office did not immediately respond to a request for comment on the coming endorsement.

The Democratic National Committee is not endorsing candidates before the primary votes, but the organization likes what it sees in coal country.

“Focusing on middle class families, on American workers, in these Appalachian and more rural areas is something that is successful for Democratic candidates to run on,” said Elizabeth Renda, a DNC spokeswoman.

Reporting by Timothy Gardner and Valerie Volcovici in Washington; Editing by Richard Valdmanis and Frances Kerry