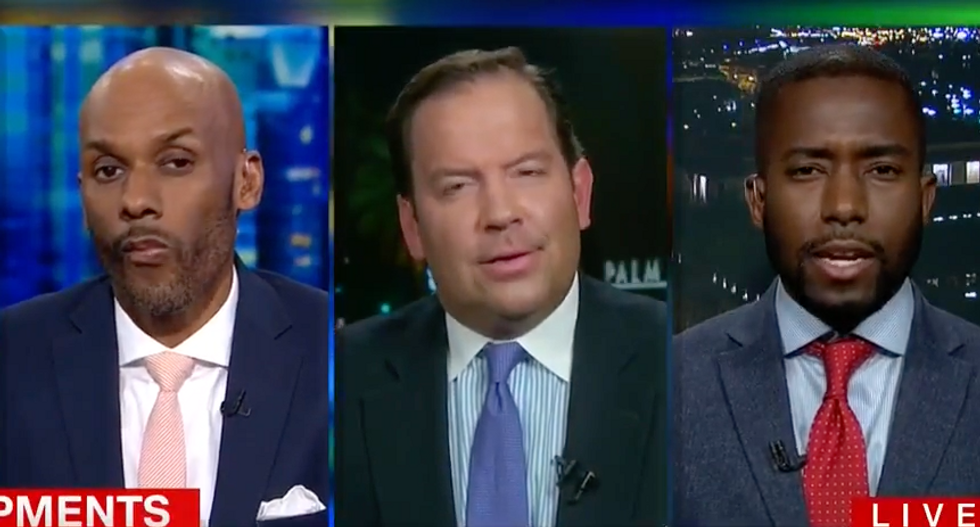 A CNN panel on the White House’s response to police violence against black people went off-the-rails Wednesday after a Donald Trump supporter insisted the real issue is minority-on-minority crime and argued that police are immune to systemic racism.

Don Lemon asked Steve Cortes, who sits on Trump’s Hispanic Advisory Council, if he believes the president is “tone deaf” on matters of police violence after White House Press Secretary Sarah Huckabee Sanders declined to comment on the killing of Stephon Clark in Sacramento, California.

“I think the default position of this president is, in general, we default to the side of the cops and we believe them,” Cortes said, “That doesn't mean there aren't bad apples.”

Cortes went on to declare real issue as “minority-on-minority violence,” before Lemon explained that has “absolutely nothing" to do with Clark’s murder.

“I'm not talking about the particulars of this case,” Cortes replied.

“I get that we have to have opposing sides of the arguments, I’m a conservative, I get it” Republican political consultant Shermichael Singleton interjected. “But I don’t get why we bring people on these networks who say the utterly ridiculous things like everything Steve has said since we’ve started this discussion.”

“It is obvious, it is blatantly obvious that the president, the White House, has a difficult time discussing race,” Singleton continued. “It's obvious. This president talked about the murder of a white young lady from an illegal immigrant, why? Because it suited his political agenda. When it comes to talking about black men being killed in this country, this president and this White House stays away it from. How many more African-American men have to be killed before we consider it an epidemic?”

Cortes hit back that the real “epidemic” is “how many decades” the Democratic party has been “exploiting” minorities.

“This has nothing to do with what you're saying,” Lemon said. “Nothing at all.”

“I can use your same analogy and say why do poor whites continue to vote for Republicans when they've done nothing for them?” Singleton asked. “If you want to use that analogy. Let’s get real, it has nothing to do with it. This guy was shot 20 times and all he had was cell phone. You cannot look in the camera and talk to millions of people watching the show right now and tell them there is nothing wrong that. Please tell me that's not what you're saying right now.”

“I am not for one second saying there's nothing wrong with that, and this may have been very well a cop acting very badly,” Cortes suggested before repeating that his “default position” is to “back the cops.”

“Why do you always default to the side of the police officer instead of being equal and wondering what happened?” Lemon pressed.

“I'll tell you why,” Cortes replied. “First of all, because all cops are not white, clearly.”

“What does that have to do with anything?” Singleton demanded.

“Nobody mentioned anything about police officers being white,” Lemon added.

“It gets to the idea that there's systemic racism within police and I don't believe that,” Cortes said.

“There's systemic racism in every institution in society,” Boykin explained. “The police are not immune from the rest of biases that infiltrate the rest of society. The problem is, this attitude you have that Don pointed out, that you automatically default to accepting the police point of view, is not healthy.”

“The president of the United States last year or earlier this year went and told police officers to go ‘rough up’ suspect,” Boykin continued. “To hit them on the head and that kind of thing. That's not healthy behavior.”

Lemon then wrapped up the panel, telling his guest, “I’m out of time and I’m out of patience.”