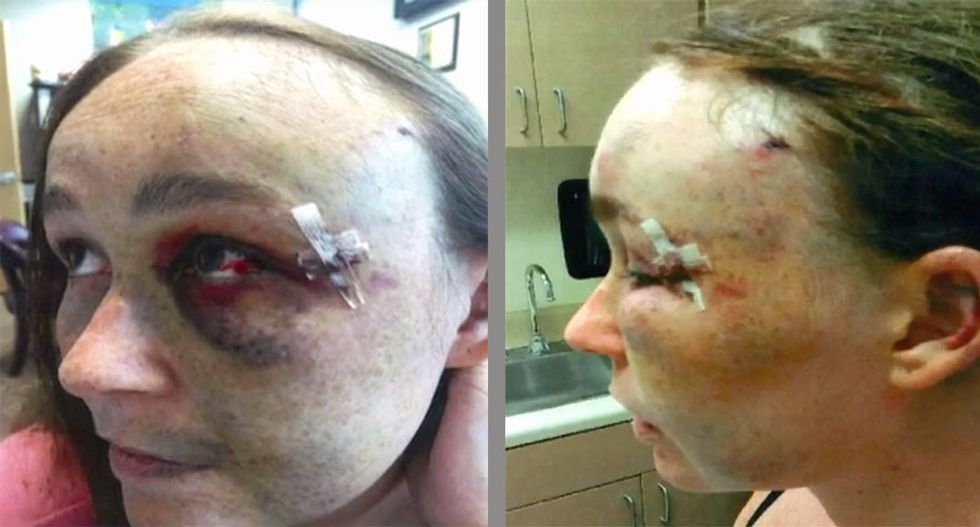 Photos of Jessica Mooney after she was taken by Fort Lauderdale Police to the emergency room for 'head trauma' suffered during police custody.

Update: The Fort Lauderdale Police Department said in a statement this week that it was incorrectly identified as the agency involved in the police brutality lawsuit filed by Jessica Mooney. According to the Miami New Times, Mooney's lawyer voluntarily dismissed the case and plans to re-file the lawsuit. Mooney now claims she suffered abuse while in the custody of the Broward County Sheriff's Office.

The Fort Lauderdale Police Department is being sued by a citizen who was gruesomely beaten just eight days after testifying against an officer caught on tape beating a homeless man, the Miami New Times reported Friday.

On February 22, 2015, Jessica Mooney was with her fiancé when he captured shocking cell phone video of Officer Victor Ramirez striking a homeless man in the face.

The video of the incident went viral, but Officer Ramirez was acquitted of misdemeanor battery and falsifying records. Ramirez was back on patrol after a 20-day-suspension.

The homeless man who was victimized, Bruce LeClair, was paid $50,000 in a legal settlement over the brutality that was agreed to in January.

Jessica Mooney testified in the criminal case against Officer Ramirez.

"All I did was try to help somebody," Mooney told ABC 10 News. "I testified because I thought it was the right thing to do, because the cop was wrong."

Only eight days after testifying, Mooney was arrested by Fort Lauderdale police over a false claim she did not pay a $63.57 bill at the Quarterdeck Restaurant.

After officers took Mooney to the station, she claims Officer Amanda Moreno "smashed her face" into a fingerprinting machine, followed by three or four officers kicking and punching her after she hit the ground.

Prosecutors declined to charge any officers in the beating. Mooney was held in the Broward County Jail for two days before she was taken to the Broward Health Medical Center emergency department for treatment of her "head trauma."