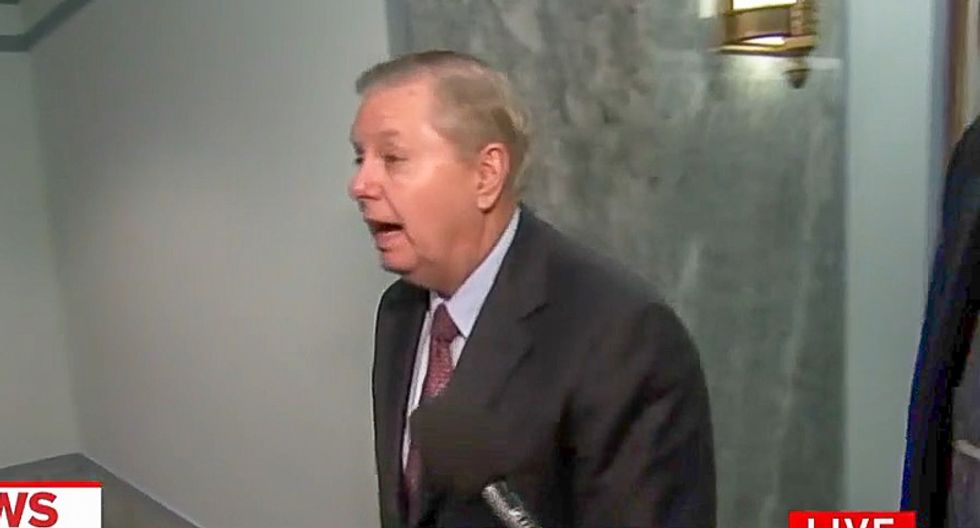 Sen. Lindsey Graham (R-SC) on Tuesday deflected questions about President Donald Trump's firing of Secretary of State Rex Tillerson and instead chose to focus on qualifications of the new nominee, Mike Pompeo.

MSNBC's Garrett Haake caught up with Graham in the U.S. Capitol Building soon after Trump announced on Twitter that he was firing Tillerson.

"I appreciate Rex's service to the country," Graham said. "Pompeo is a great choice. The primary job of the secretary of state is to be able to execute policy and to explain policy to the world in terms of what the president is thinking. Nobody is closer to President Trump than Mike Pompeo. So in that regard, I think he'll be very effective."

Haake noted that Tillerson "had a much more muscular stance on Russia than the president did."

"How much of a factor do you think that might have been in this decision?" the MSNBC reporter asked.

Graham, however, refused to talk about Tillerson.

"I don't think Mike Pompeo is taking a backseat to anyone when it comes to Russia," the senator insisted. "Mike is very clear that Russians interfered in our election and that Russians are a bad actor. I don't think it has anything to do with that."

As Haake pointed out that "two top level cabinet [are] officials out in a week," Graham began running away from the reporter without explaining why.

"How much does that concern you about people who are advising the president?" Haake wondered.

"I think Pompeo is a good choice," Graham replied as he dashed into a meeting room.