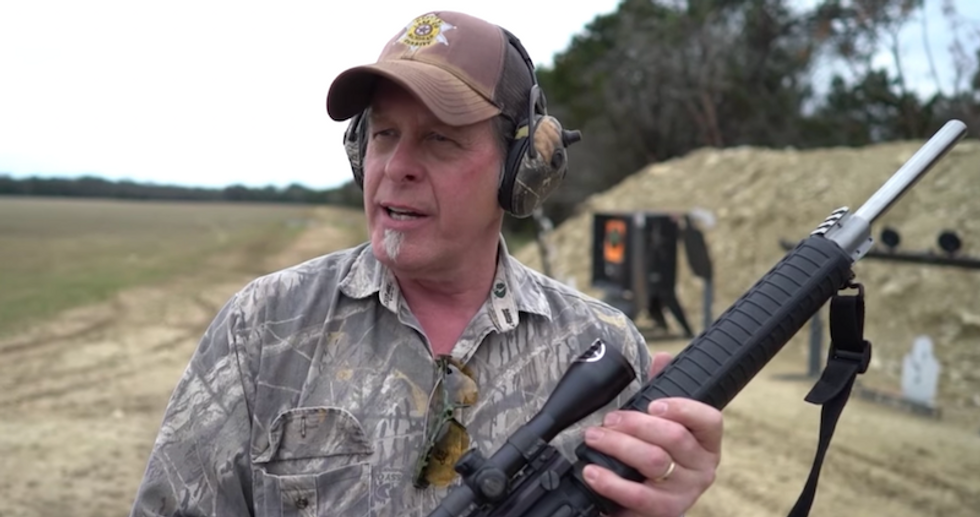 Ted Nugent appears on InfoWars to talk about guns/Screenshot

Who likes guns and why?

That's the subject of a new Scientific American article which draws from a number of scientific studies, finding a very specific profile of the average American gun owner. It's a relatively small group since just three percent of the population owns half of the country’s firearms.

According to science, the average gun owner is a white man without much education who is worried about providing for his family and who is afraid of black people.

"These are men who are anxious about their ability to protect their families, insecure about their place in the job market, and beset by racial fears," Scientific American writes. "They tend to be less educated. For the most part, they don’t appear to be religious—and, suggests one study, faith seems to reduce their attachment to guns. In fact, stockpiling guns seems to be a symptom of a much deeper crisis in meaning and purpose in their lives."

Among the works cited in the article is a 2017 study by two Baylor sociologists who plotted gun owners on a “gun empowerment scale." They found that the people who were "most emotionally and morally attached to their guns" were 65 percent male and 78 percent white.

“We found that white men who have experienced economic setbacks or worry about their economic futures are the group of owners most attached to their guns,” one of the Baylor sociologists said. “Those with high attachment felt that having a gun made them a better and more respected member of their communities.”

These men also tend to not be right with Jesus. The sociologists found that religious faith tended to stop the attachment to guns.

“The gun is a ubiquitous symbol of power and independence,” the sociologist said. “Guns, therefore, provide a way to regain their masculinity, which they perceive has been eroded by increasing economic impotency.”

These guns are a public health hazard . A woman is five times more likely to be killed by her husband when there's a gun in the home, Scientific American points out, and owning a gun is dangerous for a bitter and insecure man who is at risk of an "economic setback."

"White men aren’t just the Americans most likely to own guns," it says, "they’re also the people most likely to put them in their own mouths and pull the trigger, especially when they’re in some kind of economic distress."

In fact, white men are three times more likely to commit suicide with a gun than black men.

The solution is not to mock these men, says Angela Stroud, author of Good Guys with Guns.

“Ridicule of working-class white people is not helpful,” she tells Scientific American.