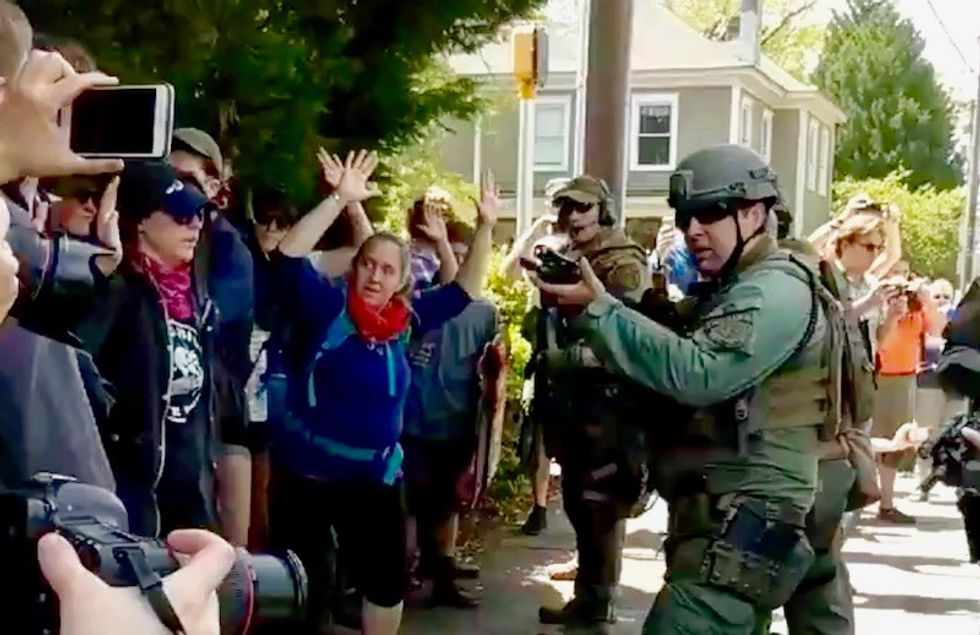 According to some reports, as few as 35 Nazis showed up to hear their leader mock men wearing skinny jeans. To protect them, the state had to send 400 heavily armed law enforcement officers in full riot gear.

But that doesn't mean things were smoothly. The cops were very aggressive with counter-protestors, according to reports from the scene and videos which show use-of-force arrests because of bandanas.

Huffington Posts's Christopher Mathias was shocked by the brutality of the cops.

"I just witness the most over-aggressive policing I've ever seen in #Newnan," he wrote on twitter. "Tackling protesters and arresting them... for wearing masks."

The issue was that anti-Nazi activists covered their faces with bandanas—which the cops responded to with violent confrontations and arrests.

Police rush into a crowded protest at the Nazi rally to snatch and arrest someone, allegedly for wearing a red band… https://t.co/doPdAKNuTm
— Jack Smith IV (@Jack Smith IV)1524337659.0

The images were described as "shocking" by others, as well.

The rally organizers carried Nazi flags but faced no violence.

The National Socialist Movement arrives in Georgia, with flags that used to bear the swastika. There can’t be more… https://t.co/TjxUknaIcg
— Jack Smith IV (@Jack Smith IV)1524341664.0

The Nazis were seemingly emboldened by their protection forces. When Mathias tried to ask organizer Jeff Schoep a tough questions, the Nazi told him that he would "have [him] removed for being disrespectful."

The police in Georgia are arresting anti-nazi protestor for wearing masks because of a law written to prevent Klan… https://t.co/EGplr4c62N
— Quincy Johnson II (@Quincy Johnson II)1524345268.0

In videos, officers aggressively watched to see anyone with a mask and then grabbed them and pull them to the ground while pointing assault rifle-style weapons at the crowd.

Video of arrests in #Newnan with one officer pointing his rifle at protesters and press https://t.co/72ODQjEx99
— Daniel Shular (@Daniel Shular)1524335818.0