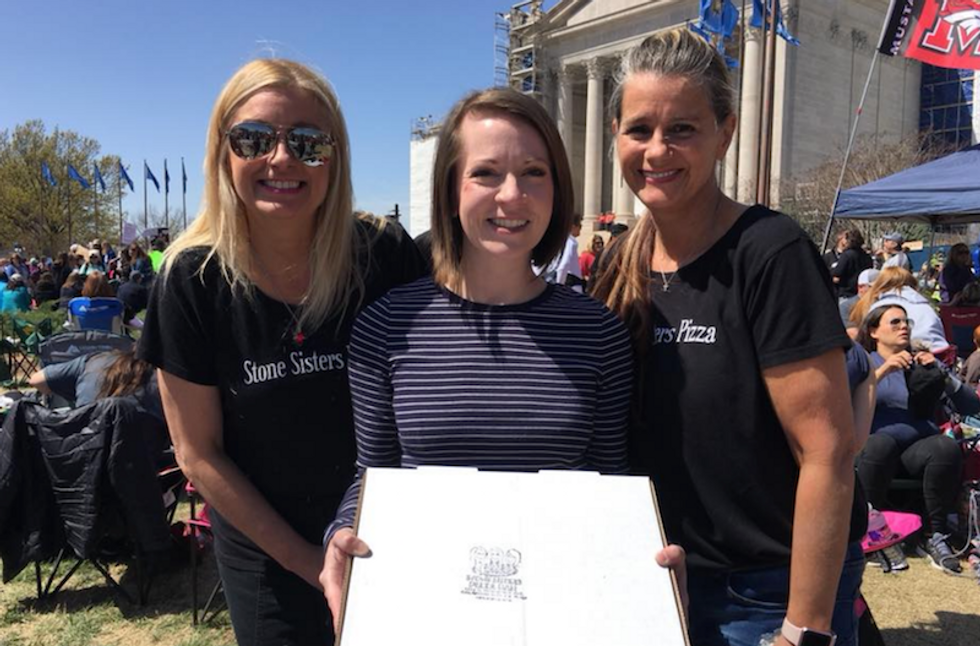 A pizza shop near the state capital building in Oklahoma is getting calls from people in blue states who want to support teachers there during their protest for more resources and better pay, reports Oklahoma City's Fox affiliate.

Stone Sisters Pizza Bar is just a few blocks from the state legislature, which is controlled by Republicans who have given themselves raises while slashing the budget for education. The Oklahoma Republican governor has compared the teachers to bratty teen who "want a better car," while the teachers say they want a modest raise and to be able to teach out of matching textbooks.

Stone Sisters has had a steady stream of calls to deliver pizzas by people who sympathize with the teachers, they say. It started with a man in Denver who ordered 10 pizzas and has included people from California to Oregon to Canada.

"This is so AWESOME!!!!! THANK YOU TO EVERYONE ACROSS THE NATION!!!" said one teacher in response to the company's Facebook post.

I love good people!! We have so many amazing people! Bobby Clark from Denver started something amazing. He ordered 10...

The Supreme Court is back in session. Here’s what to expect

As a new Supreme Court term began this week, many Americans are still feeling the aftershocks of the last one. In its first full term with a conservative supermajority, the high court overruled Roe v. Wade, substantially expanded the scope of the Second Amendment and scaled back the barrier between church and state. Abortion access, following the court’s ruling in Dobbs v. Jackson Women’s Health Organization, has become a legal, political and medical issue to an extent not known in decades. Lawmakers and law enforcement officials in states with restrictive concealed-carry laws are still working out how to adjust their firearms regulations in light of New York State Rifle & Pistol Association v. Bruen.

The president is asking that the Justice Department stop classifying cannabis as the same as heroin, noting "it makes no sense." It would move cannabis away from a Schedule I drug. It has been part of the lobbying from veterans groups and other health groups about the benefits of cannabis.

In a video just released by the White House, President Joe Biden says, "First: I’m pardoning all prior federal offenses of simple marijuana possession. There are thousands of people who were previously convicted of simple possession who may be denied employment, housing, or educational opportunities as a result. My pardon will remove this burden."