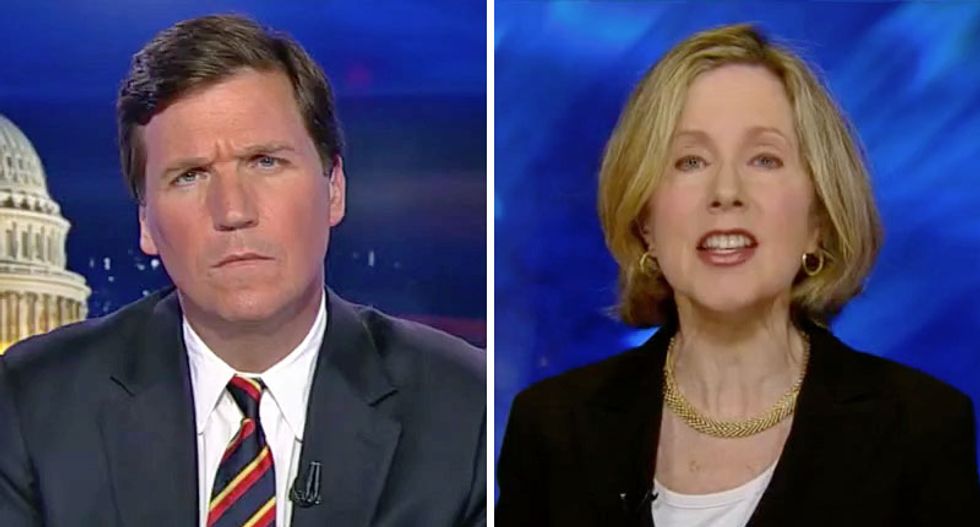 Heather Mac Donald authored the 2003 book Are Cops Racist? and the 2016 book The War on Cops.

"You may have noticed that American schools have been increasingly dysfunctional, many of them, some are getting more dangerous, but you may not know that a federal policy as part of the reason," Carlson claimed.

"Schools were warned by the Obama administration that they would lose federal funding, unless they got there suspension and expulsion rates down," Mac Donald claimed, referring to racial disparity gap. "So as you say, schools simply stopped imposing completely legitimate consequences on very serious forms of school disorder."

"It assumes, without even trying to prove, that there can be no behavioral disparities between black and white students," she argued. "If you look at crime rates, if you look at the fact that black males between the ages of 14 and 17 commit homicide at ten times the rate of white and Hispanic male teens combined, it's not surprising that in the classroom classroom, the same lack of socialization that leads to those highly disproportionate rates of violent crime, is also affecting student behavior."

This is not the first time Mac Donald had raised eyebrows with her views on race and crime, as she was a prominent proponent of the so-called "Ferguson Effect."

"Mac Donald was the first to identify this effect, which she traces to anti-police rhetoric and then the resulting wariness of police to enforce the law and arrest lawbreakers," the National Review reported.

During the 2016 campaign, Mac Donald published an op-ed in The Wall Street Journal titled "The Myth of the Racist Cop."

WASHINGTON, D.C. — Democratic Senators on Capitol Hill Wednesday agreed that the vote in Kansas over abortion access further proves that the Supreme Court got it wrong on Dobbs v Jackson Women's Health.

Rashida Tlaib beats back another primary challenge, looks likely to return to Congress

GOP Indiana Rep. Jackie Walorski and two members of her staff were killed in a fatal vehicle crash during the August recess.

Walorski, the ranking member on the House Ethics Committee, was traveling in a sports utility vehicle when a passenger car crossed the centerline, causing a head-on collision, WSBT-TV reports.