Busloads of migrants from 'caravan' arrive at US-Mexico border 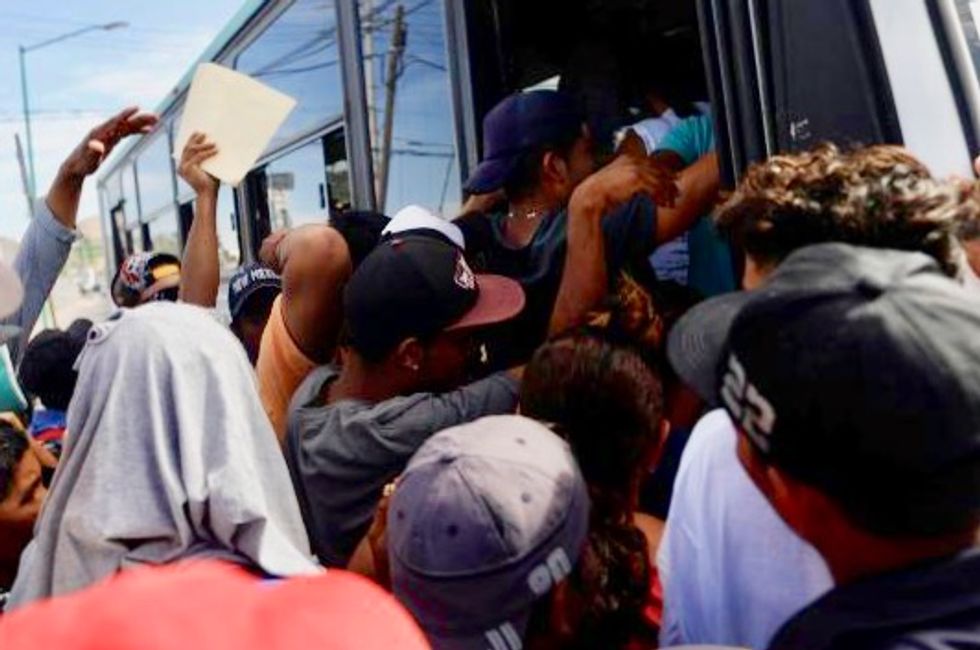 A group of Central American migrants, moving in a caravan through Mexico, get on a microbus to get to the office of Mexico's National Institute of Migration to start the legal process and get temporary residence status for humanitarian reasons, in Hermosillo, Sonora state, Mexico April 24, 2018. REUTERS/Edgard Garrido

Dozens of Central American migrants from about 600 traveling in a “caravan” through Mexico arrived at the border city of Tijuana late on Tuesday despite warnings it would be futile to try to cross to claim asylum in the United States.

By evening, two busloads of men, women and children arrived in Tijuana, a city that grazes southern California.

U.S. President Donald Trump has ordered officials to repel them.

The arrivals spilled into the streets and gazed toward San Diego, visible at spots through a rusty barrier or across a pedestrian bridge, exhausted after their trek that began a month ago near Mexico’s southern border with Guatemala.

nother four busloads were making their way north from Hermosillo, a city 432 miles south of the border, where the migrants had been stalled for days.

Many who fled their homes in Guatemala, El Salvador and Honduras because of what they described as lethal threats or political persecution have clung to the hope of receiving asylum in the United States. But their prospects dimmed after U.S. authorities released statements on Monday saying they would driven back.

Rodrigo Abeja, a coordinator from immigrant rights group Pueblo Sin Fronteras that has been organizing similar caravans for several years, said the caravan planned to regroup before making any decisions.

“They will wait for all those seeking asylum to be together,” Abeja said.

A third group, resigned to staying in Mexico, awaited processing for year-long visas by immigration authorities in Hermosillo.

Traveling as a group for safety, their numbers were down from a peak of about 1,500 people, dwindling under the twin pressures of waiting for transportation and attacks by Trump, who began lashing out at the caravan on Twitter in early April.

After Trump’s comments, Mexican authorities stalled the caravan in a southern town and began handing out temporary visas that gave them legal status to travel to the border.