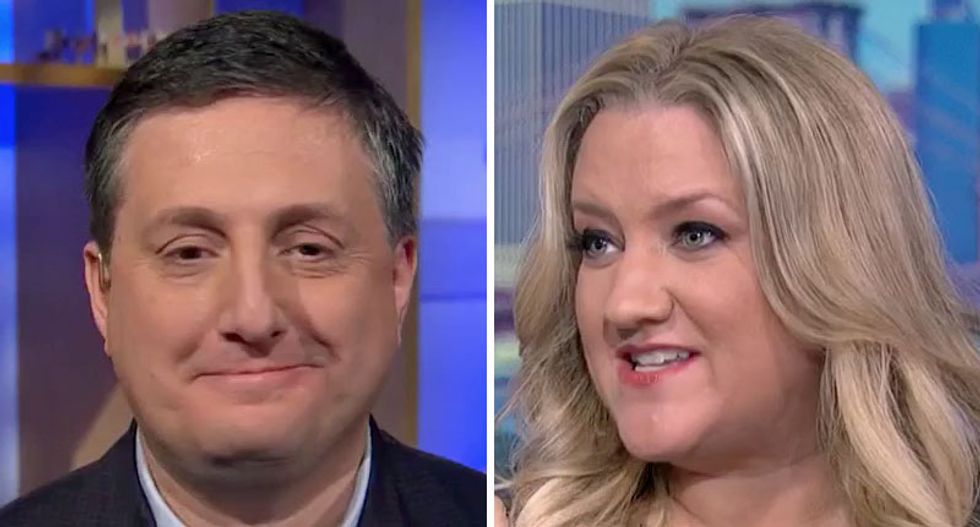 "This week, President Trump fired back at the Democratic National Committee's new multimillion dollar lawsuit that alleges the Trump campaign, Russia and Wikileaks conspired to interfere during the 2016 election," Gura reported. "Well, Trump responded to the lawsuit, on Twitter."

Just heard the Campaign was sued by the Obstructionist Democrats. This can be good news in that we will now counter… https://t.co/77ChXaPzvm
— Donald J. Trump (@Donald J. Trump)1524266391.0

"Let me just have you react to this," Gura asked. "This is a 66-page document, among the names in this suit, Julian Assange, Donald Trump, Jr., Paul Manafort, Roger Stone, Jared Kushner, George Papadopoulos, Richard W. Gates -- names that are now familiar to a lot of us."

In the 2016 election, voters actually chose former Secretary of State Hillary Clinton over President Donald Trump, who holds office due to the Electoral College.

"I would love to hear from Jen the answer to a simple question: What on earth is this president -- and this Republican Congress -- doing and protect our elections?" long-time Hillary Clinton advisor Philippe Reines challenged.

"And that's what I think this lawsuit comes down to and it's a last resort," he continued. "If the Republican-controlled Congress would have had any committee hearings or any legislation or anything at all to follow up on its own intelligence, there would be no need to file a lawsuit."

"I think a lot has been done. You have Kris Kobach is doing an analysis with each of the Secretaries of States throughout the states," Kerns answered, as Reines loudly laughed. "I was an Assistant Secretary of State in California, tasked with ensuring the integrity of the votes."

The so-called Voter Fraud Commission existed for 237 days between Trump launching it in May and dissolving the commission in January.

The Kansas Attorney General was placed in contempt of court on Wednesday by a local district court judge.

"Jen, with all due respect, when you're answering the question with Kris Kobach right off the bat, you are absolutely making my point," Reines argued.

"The president can't fire a lawsuit," he noted. "And if you look at the trouble he's in right now, it's lawsuits being brought by Stephanie Clifford and by Karen McDougal that might do more damage than anything."

"This lawsuit is the only thing that Donald Trump cannot fire and that's why it's being filed," Reines concluded.